It’s the Ling Fling – Target These Aggressive, Powerful Fish on the Ice! 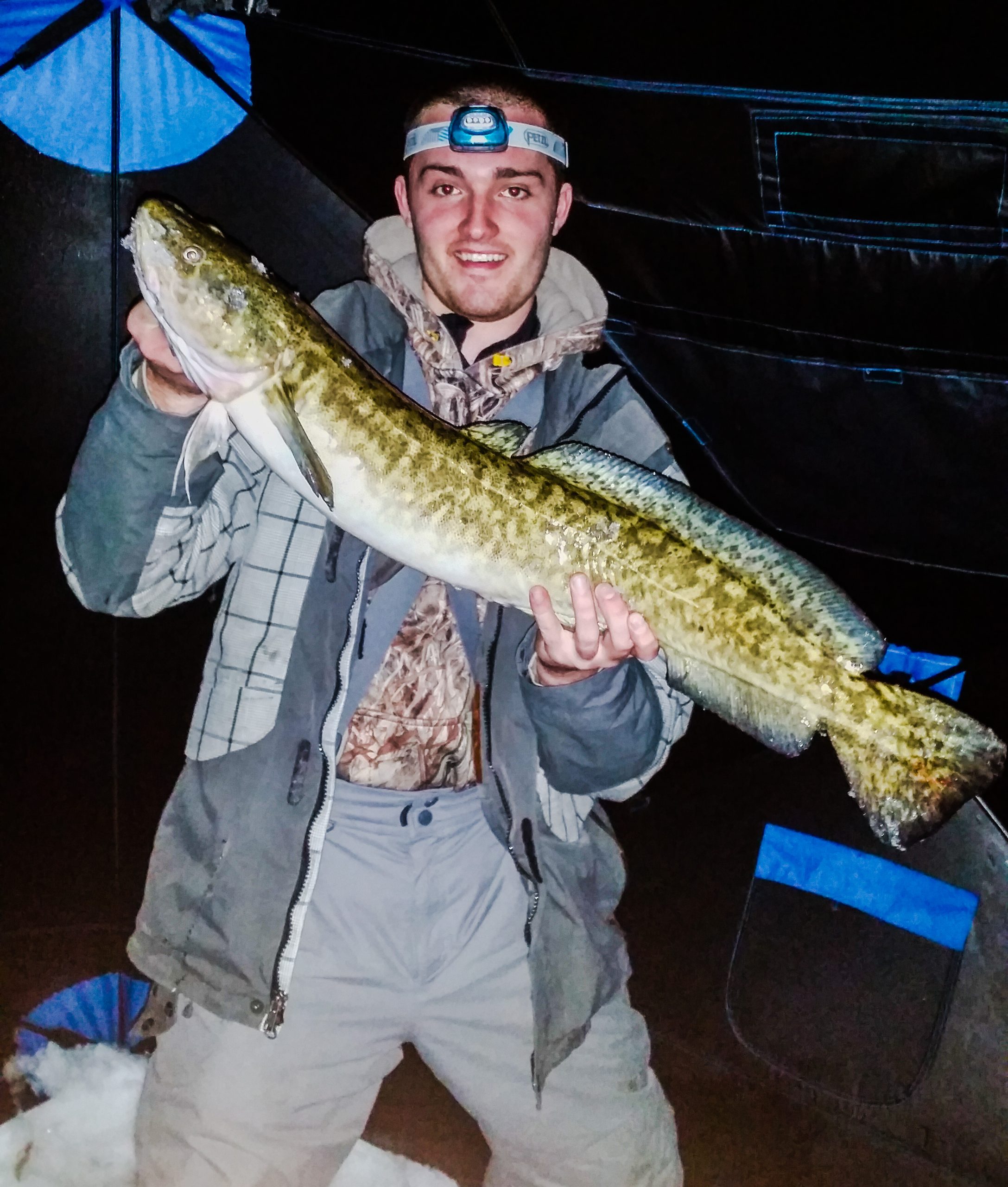 Burbot, ling, eelpout, lawyer, freshwater cod, eel-looking thing… whatever you call it, it’s gaining popularity across the region for ice anglers. Records are being broken as more anglers are targeting these feisty fish. I think I know what is causing all this recent excitement in ling fishing, and you owe it to yourself to join in the fun!

Burbot are an aggressive fish often found in schools roaming and feeding underneath the ice’s surface. A burbot’s colourings reminds me of the desert storm camouflage pattern, and it’s body morphology is something to see as they can be described as a cross between a catfish and an eel. This is due to their long whisker under the chin and elongated dorsal fin. You will often hear anglers say that they will even wrap around your arm like a snake! They move differently than other species when on the ice, but this is due to them being a highly-specialized species. I highly recommend trying your luck to get a closer look at these hard fighting and wonderfully painted specimens.

Northeastern Ontario is home to some excellent burbot waters, with some of these lakes even hosting an annual winter ice fishing event called the “ling fling”. Many deep, clear lakes found in the region with high oxygen levels are ideal for burbot survival. Burbot are excellent environmental indicators (just like lake trout) to some of the region’s best waters. Some of the most well-known and densest populations of burbot in the region include Lake Temagami, Lake Wahnapitae, Lake Timiskaming, Abitibi Lake, Onaping Lake, Lake Penage, with even Lake Nipissing experiencing better catch rates in recent years.

Ling are a cold-water fish and a general rule of thumb if there is lake trout, there are generally burbot. If you don’t frequent these bodies of water, think back to stories you have heard of people not being able to catch a walleye because they couldn’t keep the burbot off their lines. These are great people to ask as they will likely give you their exact location–many anglers view these fish as ugly bottom feeders not fit for the table.

However nothing could be farther from the truth! Recent studies have shown that they are top predator in the lake, and make an awesome meal whether pan fried or in chowder. You owe it to yourself to give them a try as they are naturally boneless and super easy to fillet.

On the Prowl for Burbot

A unique feature to this species is that they are the only freshwater fish species to spawn underneath the ice, usually beginning in early to mid-February. This makes the late February and March ice fishing season one of the best times to target them.

Burbot spawning activity is also much different than most other freshwater fish. They will form large spawning balls of fish where they appear intertwined together, all competing to fertilize the female’s eggs. Burbot spend an enormous amount of energy in developing their gonad and compared to other species, both male and female have extremely large gonads. But you may be asking yourself what this means to the angler? Well, it means post spawn Burbot are super hungry and very aggressive which equals great fishing!

Burbot are a nocturnal species that feed all the way through the night and often roam while they feed. It is recommended to be on the ice just before dark to get set up as the bite tends to start half an hour after sunset. Look for areas with access to deep water – usually the deepest hole in the lake or that section of the lake. Look for steep contour breaks made up with cobbles, boulders, and rock to focus your attention. Once you have identified a location, start fishing at the bottom of the break and work your way on top as the night progresses. These fish will roam on top of the flat feeding tight to bottom in the crevices between all the rocks and boulders.

Looking for burbot? Let our fishing experts be your guide!

Your presentation does not need to be finesse in any way as burbot are in these locations to feed and clear out areas for the spawn. Some of my favourite presentations include heavy glowing jigs and jigging spoons such as a standard jig head or a buckshot spoon. Don’t be scared to drop baits in the 1/2 to 1 oz. range hard into bottom in order to stir up bottom and smash into the rocks getting their attention. Load your lure of choice with either minnows, salted cut bait, or any other tasty offering you can think of.

Burbot presentations require a loud aggressive approach with as much scent as possible to lure them in and get the bites you are in search of. Often I have caught burbot without even putting a hook into them and am positive you could land these fish with just bait. Fish have been lost while reeling up to the hole only to locate them on my graph. Simply lower the bait back down and catch them as soon as they locate the bait – did I mention they are aggressive?! 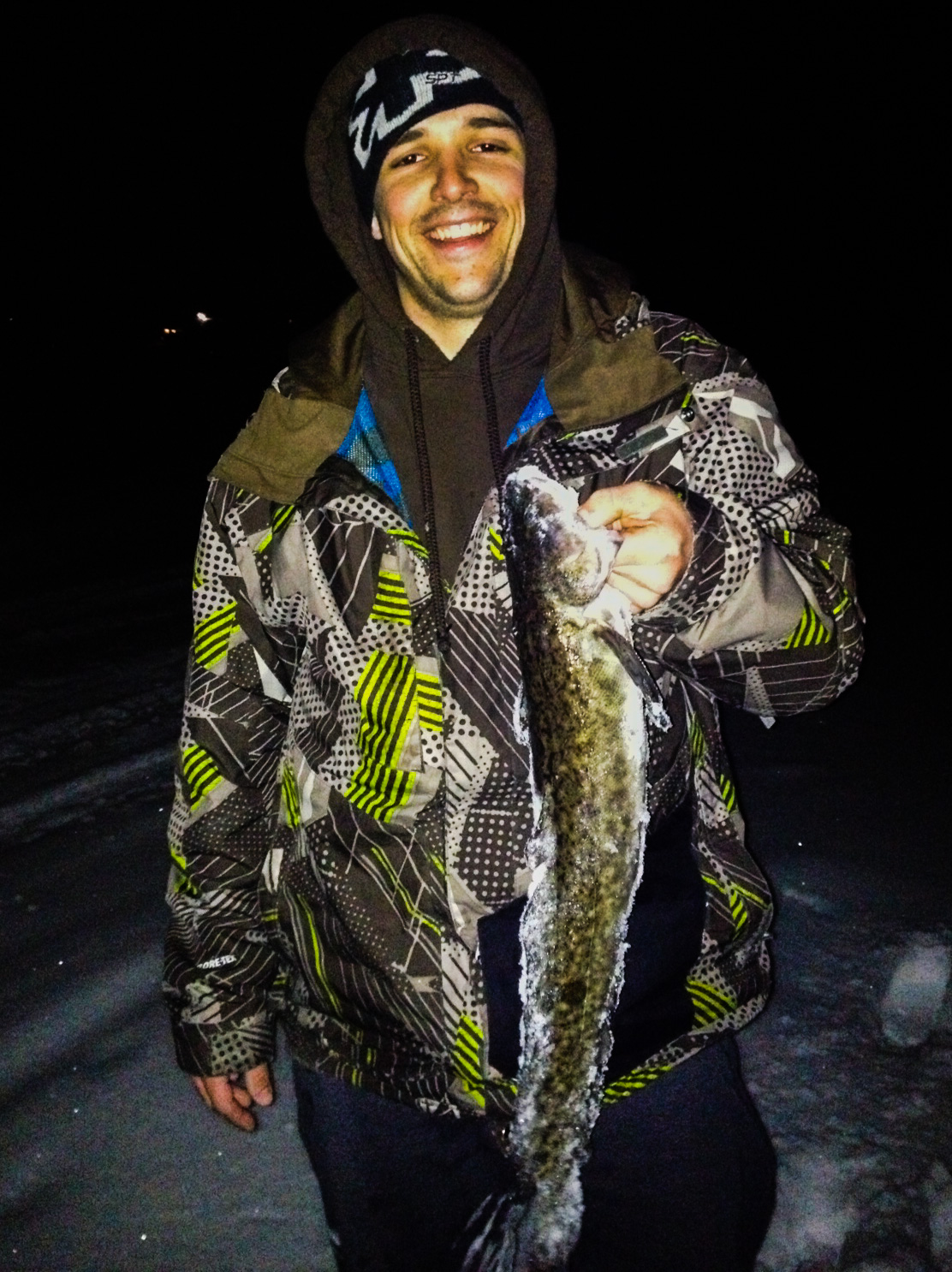 The author with a Lake Wahnapitae-caught burbot.

I hope this write-up has changed your opinion on burbot and has spiked your interest to head out in search of them. Some nights can offer an angler a handful, while others in certain lakes can produce nonstop action. These species are excellent table fare and are very comparable to any white meat fish species. Their scaleless eel looking exterior is worth ignoring next time you are fishing into the dark hours of the day, as these species provide a great fight and if you do choose make for excellent table fare.

Have fun with the rest of the ice fishing season in front of us and be sure to head out in search of another new species this year! Don’t forget to share your BIG catches with us using #neontario, or on our Facebook page. 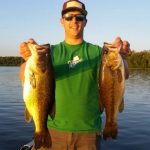