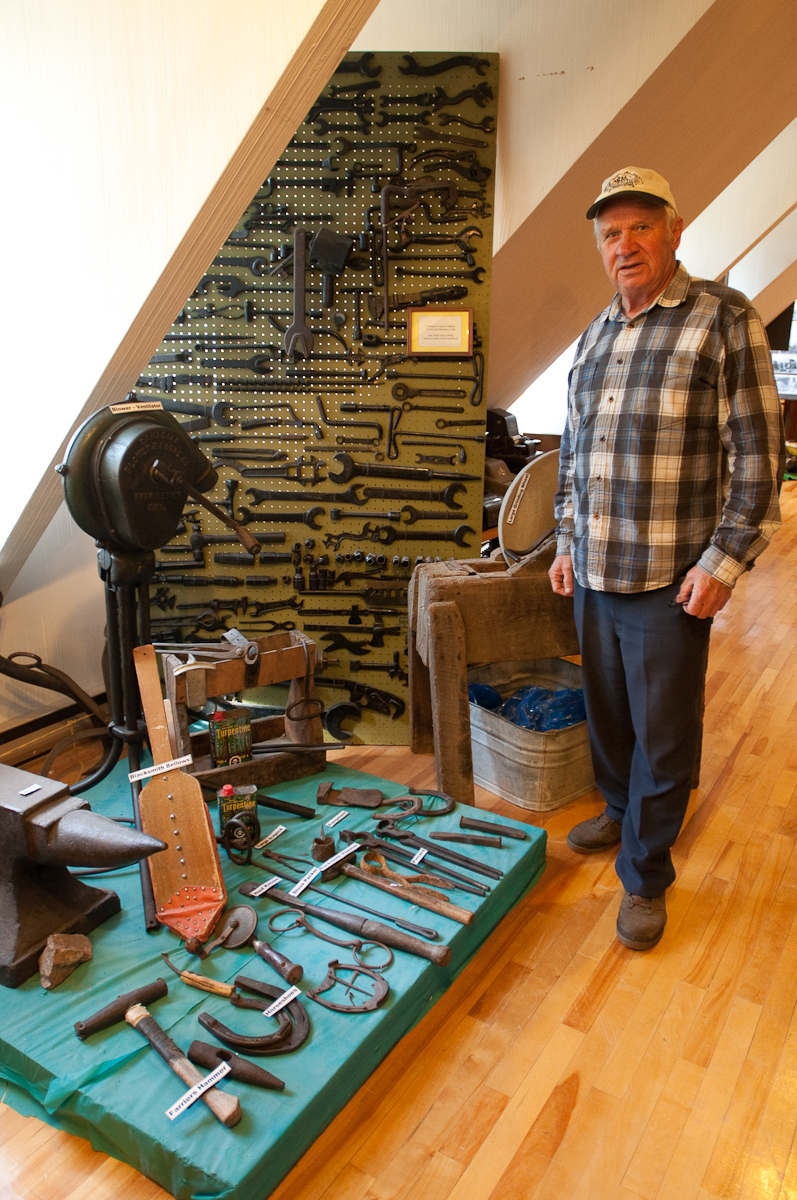 At first glance, the small log building situated on Mattawa’s Explorer’s Point seems unassuming—especially since it’s dwarfed by a 16-foot carved wooden statue of the town’s folk hero, standing just outside. But walk through the doors of the Mattawa & District Museum and it’s as if you have just opened a treasure chest of historic wonders.

Not only is the area’s history represented here with life-size historic figures, collections from bottles to buttons, and even birds as big as the giant golden eagle, but the galleries also offer a fascinating glimpse into how so many cultures survived and lived together in this north country for hundreds of years.

Mattawa – the Meeting of the Waters 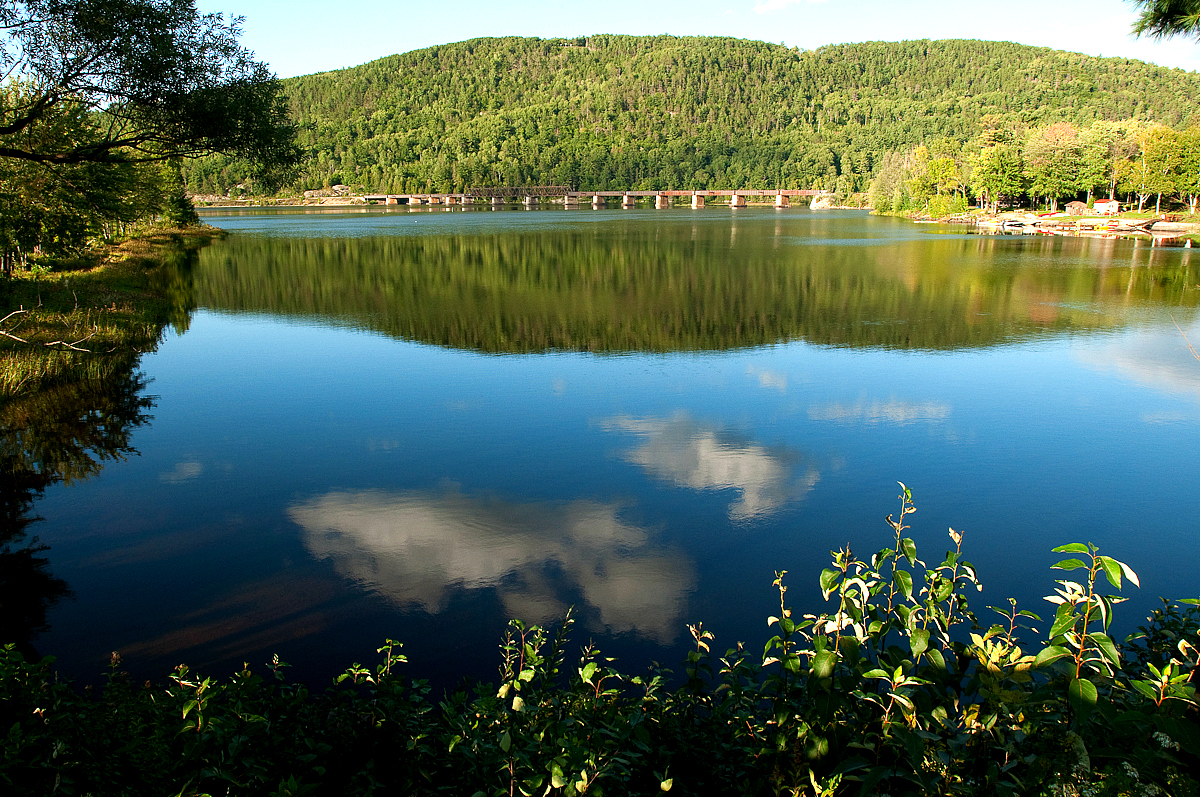 “Mattawa means the Meeting of the Waters,” explains curator Jayne Lenard as we look out onto the meeting point of the Ottawa and Mattawa Rivers. So it’s no surprise to find treasures that represent the many cultures who arrived here—First Nations peoples, French fur traders, British explorers, Scottish travellers, and other citizens coming from afar. Fitting perhaps that the museum’s architect was a Finnish-born Canadian, Jules Paivio— the last surviving member of the Mackenzie-Papineau Battalion who fought for freedom during the Spanish Civil War.

Because of this rich mingling of peoples here, you’ll find an abundance of curiosities in this intriguing museum. Some items are massive—like the old doors of the town courthouse or the giant bear with gleaming black fur standing at full height. But others are smaller like tiny brass buttons showing the town’s commitments during World War 1, First Nations arrowheads or an impressive necklace made with bear claws. “They used every bit of the animal,” says Lenard. “And a lot of people here are very proud of their Native heritage.” 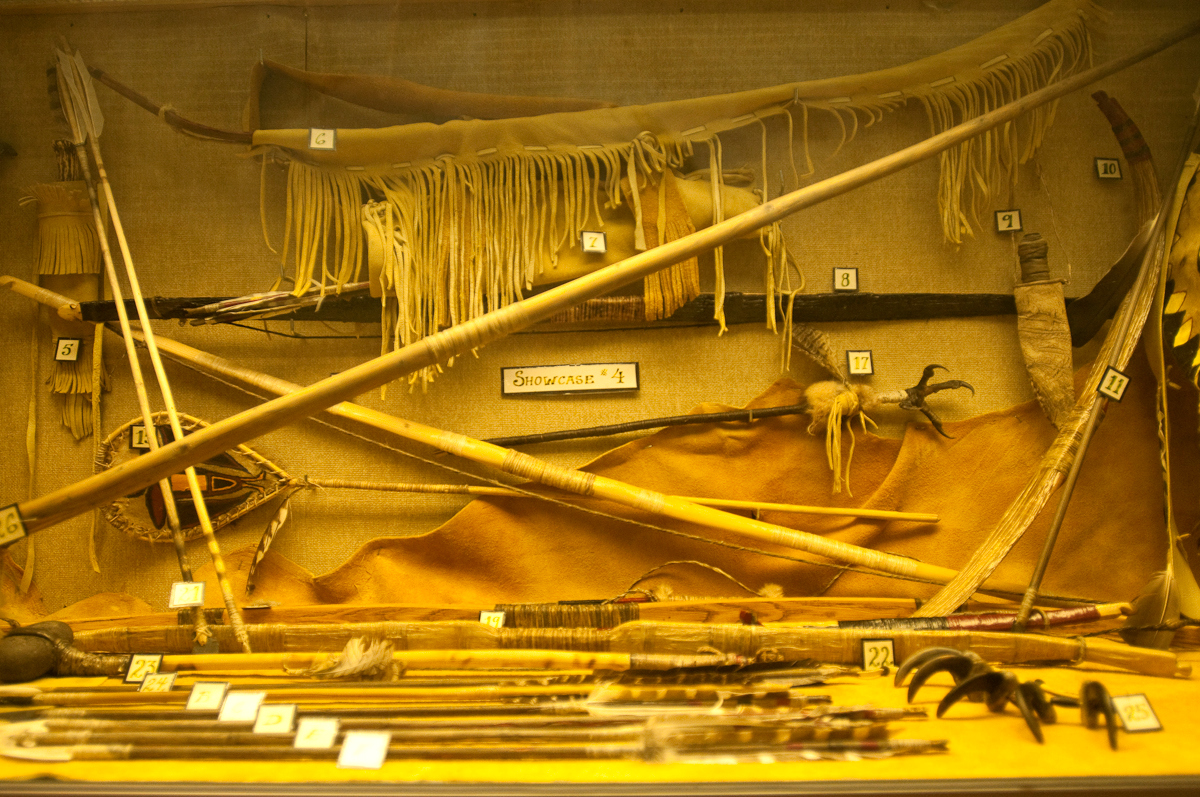 As you wander through this cosy building, here, a lantern from a Mica mine (the material was used in the windshields of aircraft during two World Wars), there, a collection of some 3,000 photos from town inhabitants, and down the stairs, the recreation of a typical former barber shop honouring the town’s barbers past and present. Visitors will see bellows used by a local blacksmith and interesting items from Native bows to bottles—many bottles, just some of the 3,000 wonderful glass receptacles collected by local citizen Vic Tremblay.

There are also thousands of local photos on display, a veritable wall of descendants showing the town’s inhabitants and their ancestors. “It’s so much fun for grandpas and grandmas to point out family members to their grandkids,” says Lenard. Fun even for non-related visitors to wonder at the costumes of the day.

The Legacy of Grey Owl & Anahareo 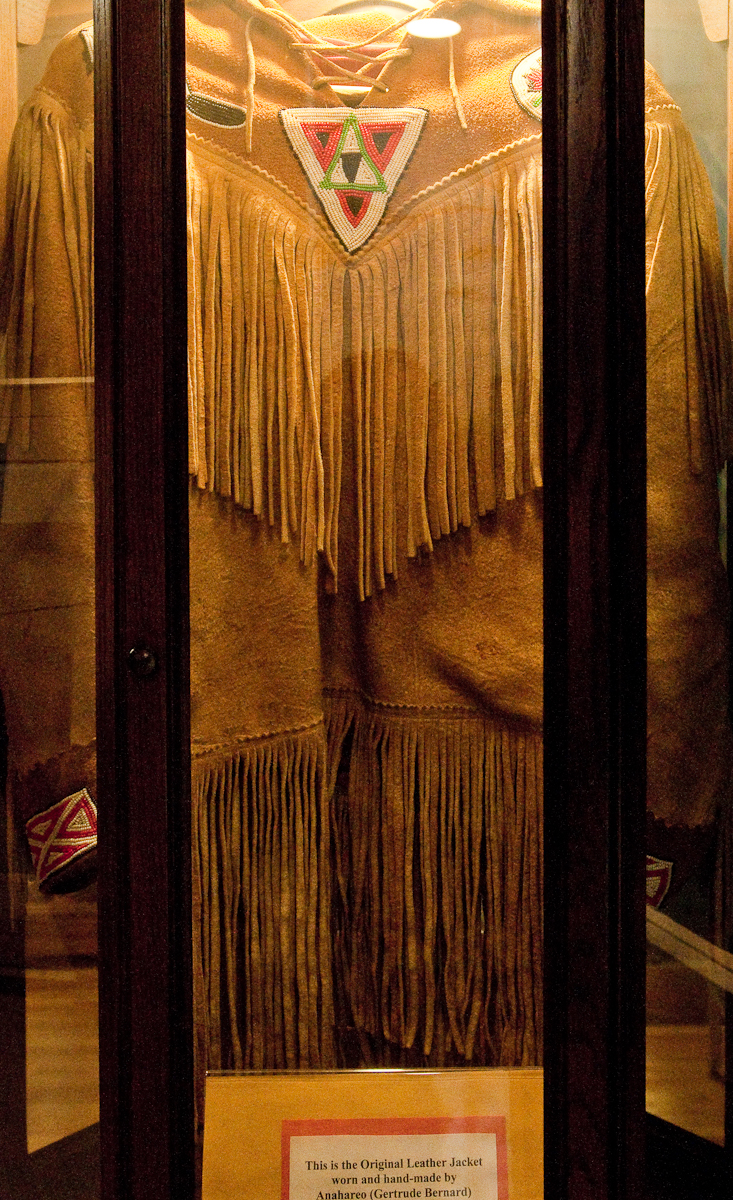 Probably the most prized display in the museum, however, is the original leather jacket worn by Mattawa-born Gertrude Bernard, also known by her Mohawk name Anahareo. This local girl married Grey Owl, the famous British-born Archie Belaney who posed as a native and wrote bestsellers about the Canadian wilderness. During their 11-year marriage, Anahareo convinced him to stop trapping and begin to care for the environment thus becoming the country’s first famous female environmentalist. Visitors will also see a life-size recreation of the couple’s cabin in Saskatchewan where a lakeside entry allowed their pet beavers to swim directly up into their home.

“Unfortunately, we can’t put everything on display,” says Lenard. “If we had a big museum, sure.” But considering the tremendous use of space here over three floors, the numbers of items, and that 1200 people visit each year, the Mattawa townspeople have successfully curated an impressive display of fascinating items. It’s definitely worth a visit for anyone heading up north.

Back outside, we gaze up at Mattawa’s folk hero: the 16-foot carved wooden statue of Big Joe Mufferaw, the folk hero with a talent for chopping down trees. Last winter, he lost an arm during a storm. So this year’s three-day Voyageur Days Festival (honouring the 20th anniversary) will include the dedication to a new statue of Big Joe with both his arms. “Instead of being crooked, he’ll be standing tall,” says Jacques Begin, Chair of Voyageur Days. “And he will be higher by another two feet,” he adds. The date: 7 p.m., Friday, July 28, 2017. The place: Explorer’s Point, for an event guaranteed to attract even more explorers from throughout Ontario and beyond. 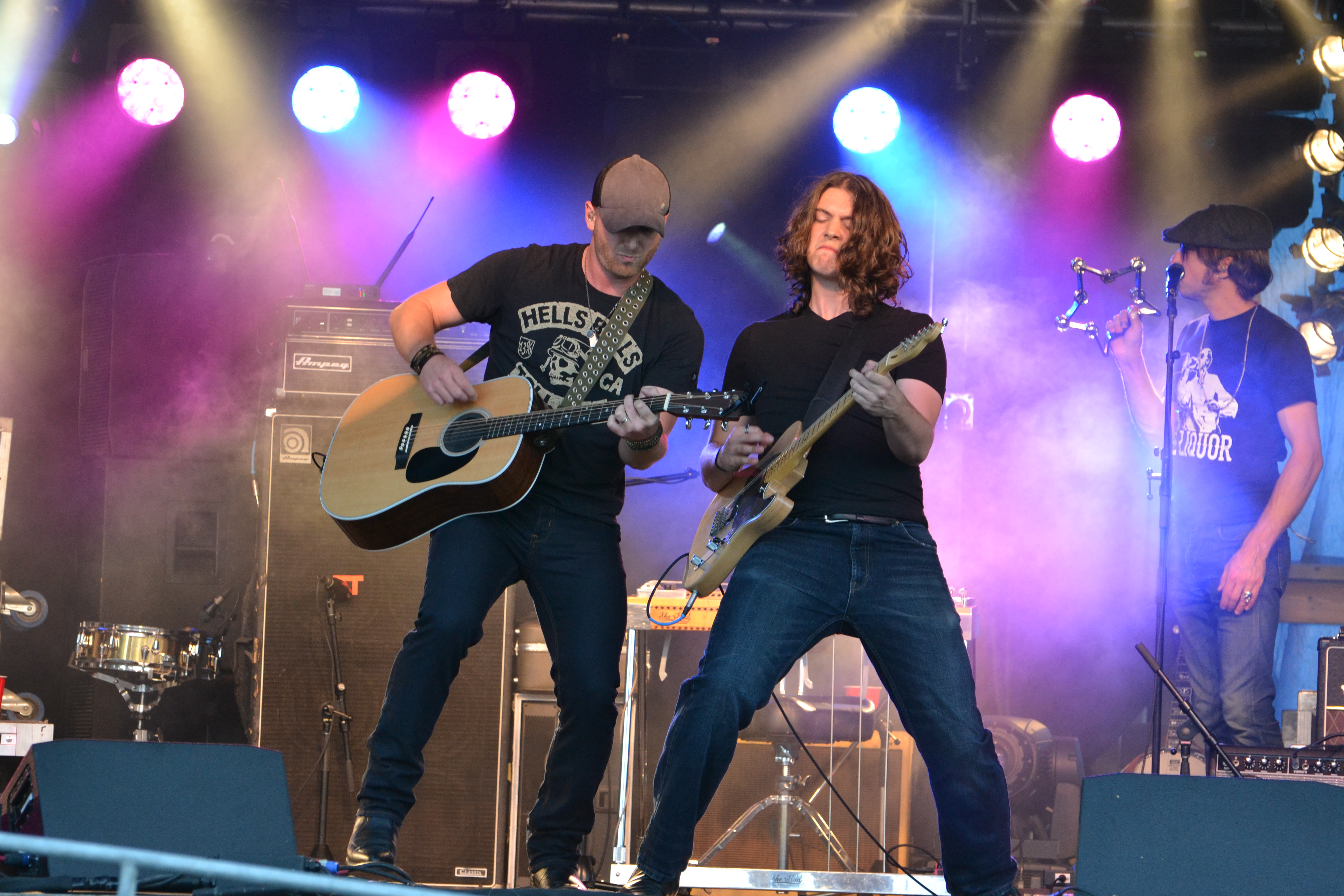 The exciting Mattawa Voyageur Days festival, the town’s annual summer festival and musical event will take place July 28-30, 2017. This year’s 20th anniversary celebration of the Voyageurs who founded the town will feature music from Stomping Taw Connors, son of Stomping Tom whose famous rollicking hit, “I’ve Been Everywhere,” places Mattawa on his world map between Panama and La Paloma!

After a visit to the Museum and the scenic Explorer’s Point, enjoy a satisfying meal at one of the local restaurants, or stay over at the popular Valois’ Motel & Restaurant, famous for their walleye pickerel, homemade burgers, and fish and chips followed by fresh blueberry cobbler or apple crisp. Better yet, stay overnight in one of their comfortable rooms overlooking the water and the beautiful northern forests.

Find more things to see and do in Mattawa! 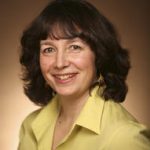 Kate Pocock is an award-winning travel writer who has published hundreds of articles in newspapers, magazines and online. As an editor, she helped to launch five publications including two travel magazines. Her favourite pastime, however, is to travel with her three kids, or nine nieces and nephews to discover intriguing stories.
Subscribe