Where to Bikepack in Northeastern Ontario 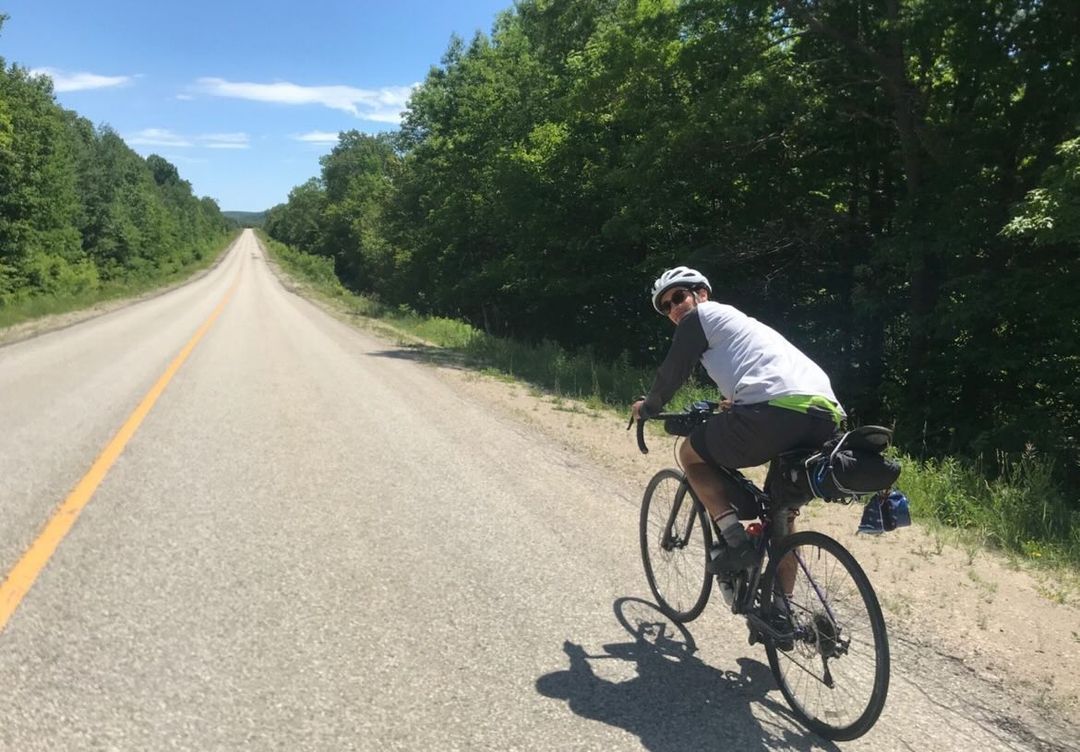 Many people choose to experience the beauty of a Northeastern Ontario summer by canoe in the quiet waters of places like Temagami or by hiking picturesque trails. But there’s a new adventure in town: bikepacking. 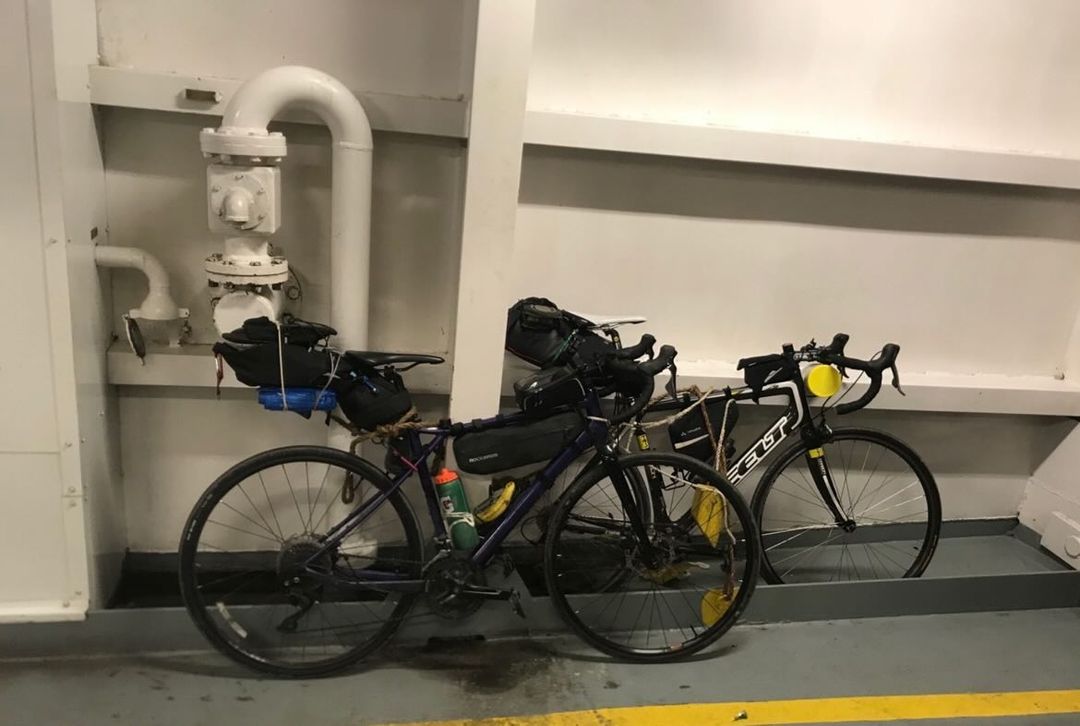 The more adventurous, rugged cousin of cycle touring, bikepacking is swiftly gaining in popularity in North America. Many bikepackers carry all their supplies on their rig, and set up camp each night instead of checking into a hotel. These trips often navigate unpaved, gravel terrain requiring the use of a gravel or mountain bike. Setting up camp and preparing meals each night makes bikepacking a recipe for type-two fun in the highest degree! 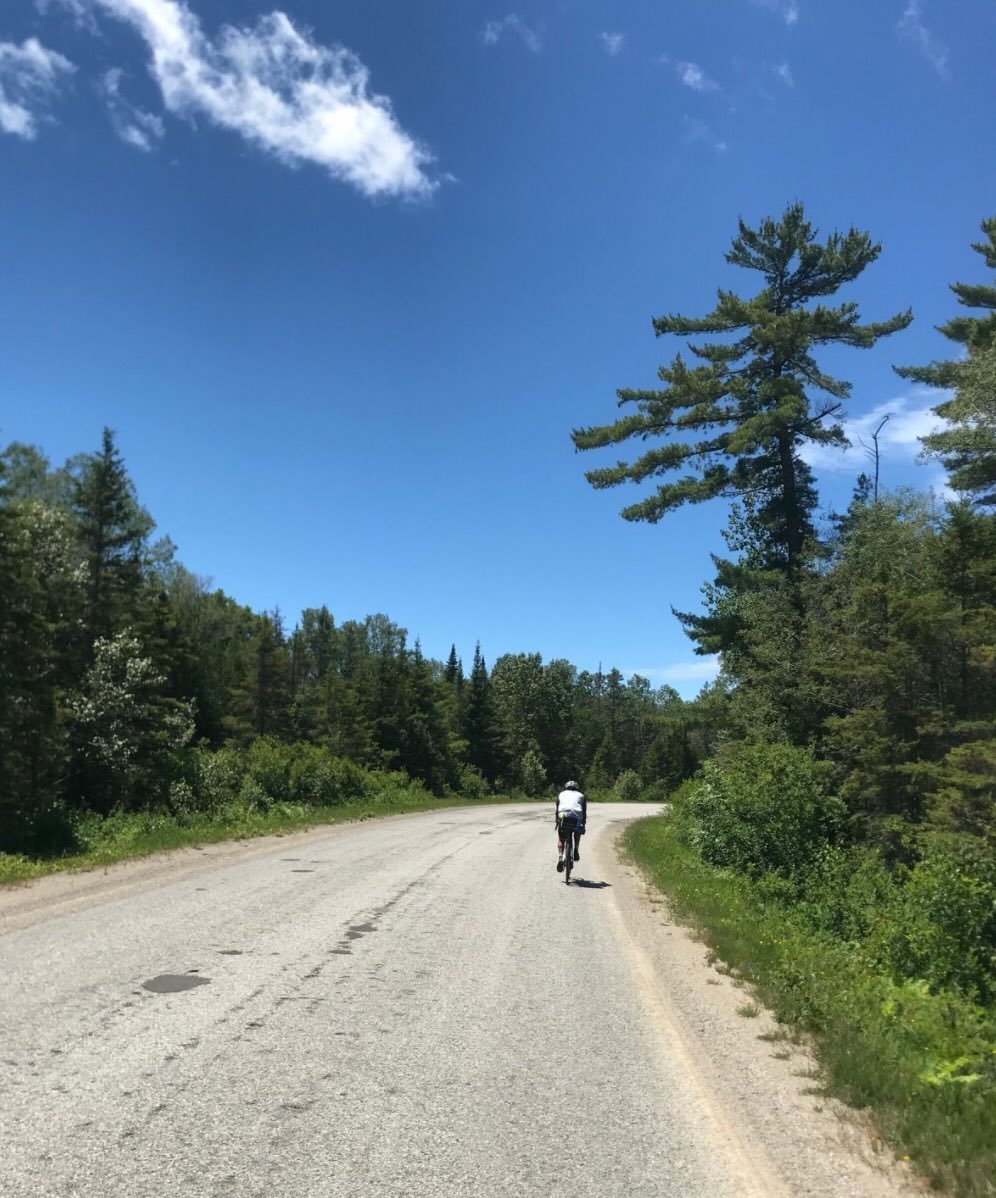 It’s also a perfect way to experience an otherwise familiar landscape. If you’ve ever driven through the many winding roads of Northeastern Ontario and noticed beautiful cliffs of rock, immense forests, or even wildlife, you’ve probably wanted to take a second to stop and really soak it in. When you’re on a bike you get that opportunity—you can breathe in that fresh northern air and appreciate the landscape at a pace that allows you to be a part of it. When you consider the camping element at the end of a day of bikepacking, it’s almost like a slower, self-powered, RV road trip.

Here’s what they had to say: 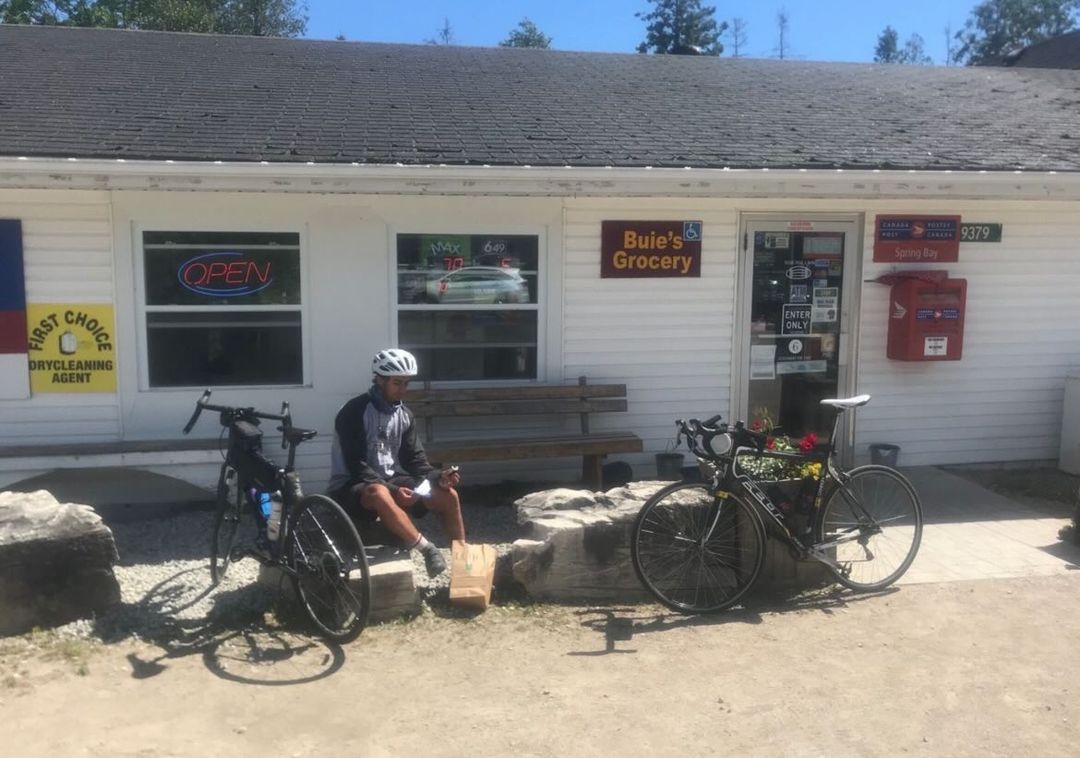 Manitoulin Island is the world’s largest freshwater island, rich in beautiful precambrian rock outcroppings, lush forests, and spectacular swimming. The island is a popular destination for adventurous tourists and is home to several restaurants, cafes, breweries and ice cream shops—as well as many hiking trails to extraordinary landscapes, such as Bridal Veil Falls.

With its reputation as a Northeastern Ontario oasis, Manitoulin Island has already attracted cyclists to its shores, mostly in the form of traditional cycle touring. The Manitoulin Island Cycling Advocates have published several routes and maps to give cyclists the background knowledge they need to plan a tour on the island. Riding on Manitoulin Island provides a great intro to bikepacking, given the conditions of the roads and campgrounds.

Jack Healey, an avid cyclist who has taken part in several bikepacking trips across Ontario and Quêbec, took three days to tour Manitoulin Island with a few friends in a mix of both traditional touring and bikepacking. Here’s Jack’s Route. And Jack’s take on Manitoulin? Give him more! He speaks longingly of the overgrown plant life, waterfalls, and small towns, describing cycling on the Island giving the same feeling as a wild coastal ride.

If you’re looking for the same feeling, the good news is there’s plenty of potential to go on a bikepacking trip on Manitoulin Island. However, take note that the following route is untried, so you’ll have to confirm accommodations with each campground and plan accordingly.

A bikepacking route on Manitoulin Island 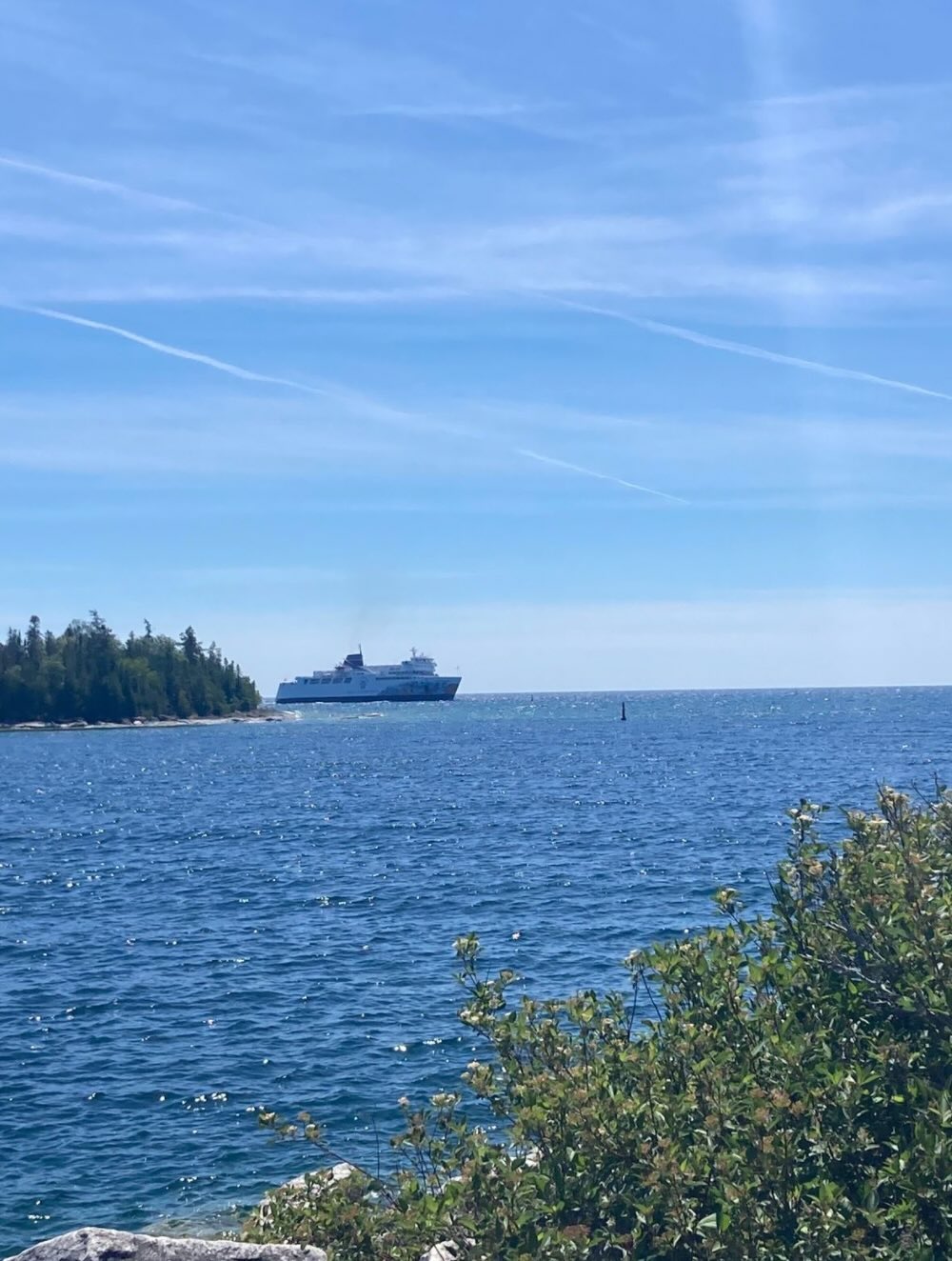 Start by taking the Chi-Cheemaun Ferry from Tobermorry to South Baymouth and riding North on Highway 6 for 50.7km. You’ll reach Batmans’ Cottages and Campground. After a great night’s stay, head West for 73km towards Lake Wolsey Obejewung Tent and Trailer Park. Relax on the beach or try your luck with a few casts in Lake Wolsey for a fresh fish fry. Stay the night and prepare for day three.

Hopefully you’ve planned accordingly and have all the ingredients necessary for a delicious breakfast and coffee. Today, you have a relatively short 56.7km ride to Meldrum Bay, the Westernmost point on the trip. If you think you’ll be ready for some indoor comfort, book your stay ahead of time at the historic Meldrum Bay Inn and enjoy dinner on the beautiful verandah (restaurant is open to Inn guests only). Or continue your camping adventure at the Meldrum Bay Marina and Campground. Enjoy exceptional views of Lake Huron as you look out towards Cockburn Island situated just east of the international border between Canada and the United States. After three days of riding, you’ve earned a beautiful lookout.

Depending on your riding abilities, you have two options on day four. You can ride the 56.7km back to Lake Wolsey Obejewung Tent and Trailer Park or push yourself for a 95.9km ride to Mindemoya Court Cottages and Campground. You’ll be rewarded with a deep-water sunset swim on one of the prettiest lakes on the Island. There are also several dining options in Mindemoya. Either way, the majority of the route is now behind you. Sit back at your campfire tonight and listen to the wind in the trees as you near the end of your journey.

Spend the last night of your trip at Manitoulin Ecopark, a dark sky preserve. The ride is a short 29.7km from Mindemoya, which means you have lots of time for a post-breakfast lounge on the dock (or stop in town for a giant ice cream cone!), or 62.8km from Lake Wolsey Obejewung. Manitoulin Ecopark hosts an impressive dark sky preserve nestled in a hardwood forest with a 360° of the night sky. On a clear night, expect an epic array of stars above you; a worthwhile sight after five days of cycling.

From there it’s one last quiet morning before a short ride back to South Baymouth to catch the ferry to Tobermory! 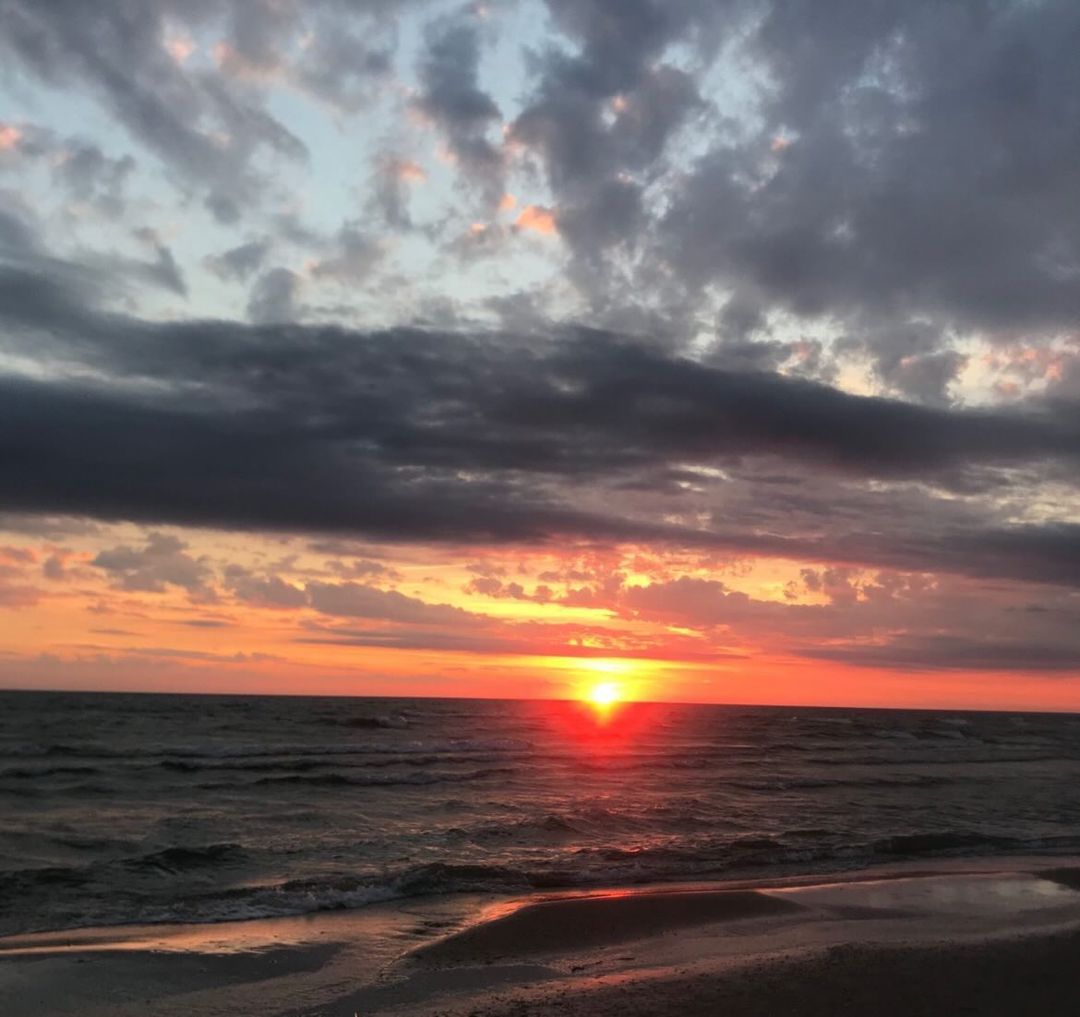 The Temagami Wilderness area is a vast expanse of wild lakes, towering Old Growth Eastern Red and White Pine trees, and some of the highest elevations in the province. You could spend a lifetime navigating the area by canoe and enjoying some of the best hiking and fishing in the province, but bikepacking?

Janne Blom has spent plenty of time canoeing, catching fish, and camping with his wife in the pristine Temagami wilderness. He’s also a cyclist motivated to explore Northeastern Ontario by bike during any month of the year.

Recently, Janne put together a short 166km bikepacking route in the Temagami region and was kind enough to share it with me. The route crosses the Sturgeon River and Sturgeon River provincial park, the Chiniguchi Waterway Provincial Park, passes by Wolf Lake (the site of the largest known contiguous stand of Old Growth Eastern Red Pine forest in the world) and highlights beautiful ridges and waterfalls along the way. Check out Janne’s route.

The style of camping along this route is what makes it recommended only for experienced riders with sufficient backcountry experience. You will have to purchase a permit if you’re planning to camp in the non-operating provincial parks (meaning that there are no gates, no facilities, and that it’s run as a wilderness park), or set up on crown land. Anyone wishing to complete this route should familiarize themselves with Crown Land Use policy and review the atlas before planning and potential campsites.

Cyclists could enjoy this route over 2-3 days, or push to get it done in one extremely long one. Due to the remoteness of this route, it’s best to plan accordingly and make sure that you have redundancy on safety gear and replacement parts, have the correct equipment, and are adequately prepared. At minimum, a gravel bike is essential.

The feel of loose gravel, the warmth of a Northeastern Ontario summer, and the remoteness of the many lakes that present themselves on a map of Ontario as you head north compelled Mark Manners and his team to ride all the way from Ottawa to Timmins.

Born and raised in Timmins, Mark was familiar with the many gravel roads that make up what he considers some of the best bikepacking in the province. Cycling Northeast from Ottawa, the team crossed into Québec from Deep River before making their way East back into Ontario.

The rest of the route, as described by Mark, was picturesque gravel riding. Heading North from Elk Lake, Mark and his team reached Matachewan before riding West on highway 566. In between Matachewan and Timmins there are numerous gravel roads that adventurous riders can take if they’re looking to create a bikepacking route of their own. The surrounding landscape is full of crown land spots where cyclists can set up camp and take in the sounds and sights that only a beautiful night in Northeastern Ontario can offer.

The remoteness of these gravel roads makes preparation key for a successful trip. Have the appropriate safety gear and speak to locals before you go to get an understanding of the conditions of the roads. Plan your camping spots in advance and make sure that you’ve consulted the Crown Land Use policy and atlas. Always give someone you trust a detailed trip itinerary before you leave.

Check out these gravel roads Mark and his team road en route to Timmins here.

The Great Lakes Waterfront Trail begins in the Easternmost part of the province and takes riders through a tour of the Great Lakes region ending in Sault Ste Marie. This famed route extends as part of the Great Trail (also known as the Trans Canada Trail), a coast-to-coast multi-use route. While not a bikepacking route per say, elements of it may interest those looking for touring options.

Riders who want to attempt the Northeastern Ontario section of the route can start at South Baymouth on Manitoulin Island and ride North towards Espanola. Alternatively they can begin in Sudbury. From either destination they can make their way West through the La Cloche Mountains and onwards towards Northwestern Ontario.

The trail passes through small sections of crown land that could be used by bikepackers for camping, or they could stop at some of the several campgrounds along the way.

Check out the trail 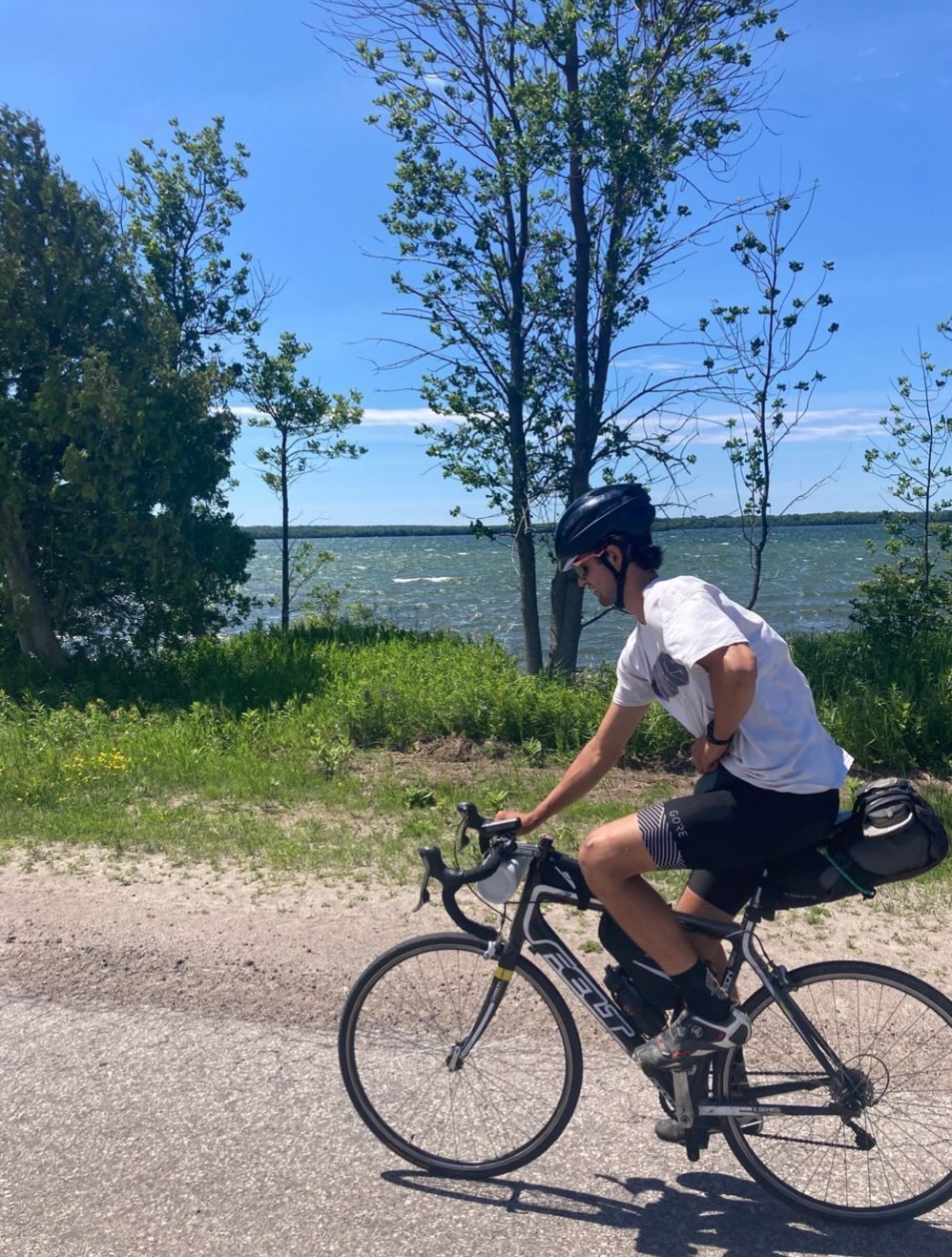 The Voyageur Cycling Route heads West from Ottawa and takes riders above Algonquin Park towards Sudbury where it joins the Great Lakes Waterfront Trail. While not a bikepacking route, it’s impossible not to mention the infamous Voyageur cycling route. Following the border of Ontario and Québec, the route enters the Northeastern Ontario boundary just before Mattawa, where cyclists can continue riding West.

Summers in Northeastern Ontario are special. Rock outcroppings on pristine lakes surrounded by towering pines beckon you to stay put in your camp chair as you listen to loon calls, stay warm by the crackling fire, and soak in the starry skies above. And there’s no better way to explore it than with your own two legs on two wheels.

How to get started

If after reading this you’re ready to hop on your bike and start your own adventure, here’s a list of resources to get you started!

Mitch Bowmile is a freelance filmmaker, photographer, and writer telling stories of exploration and impact. He works primarily to support adventurous brands in getting people outside and environmental non-profits in protecting our wild spaces. Find Mitch exploring Northeastern Ontario by canoe, snowshoe, bike, and skis. Learn more at www.mitchbowmile.com
Subscribe