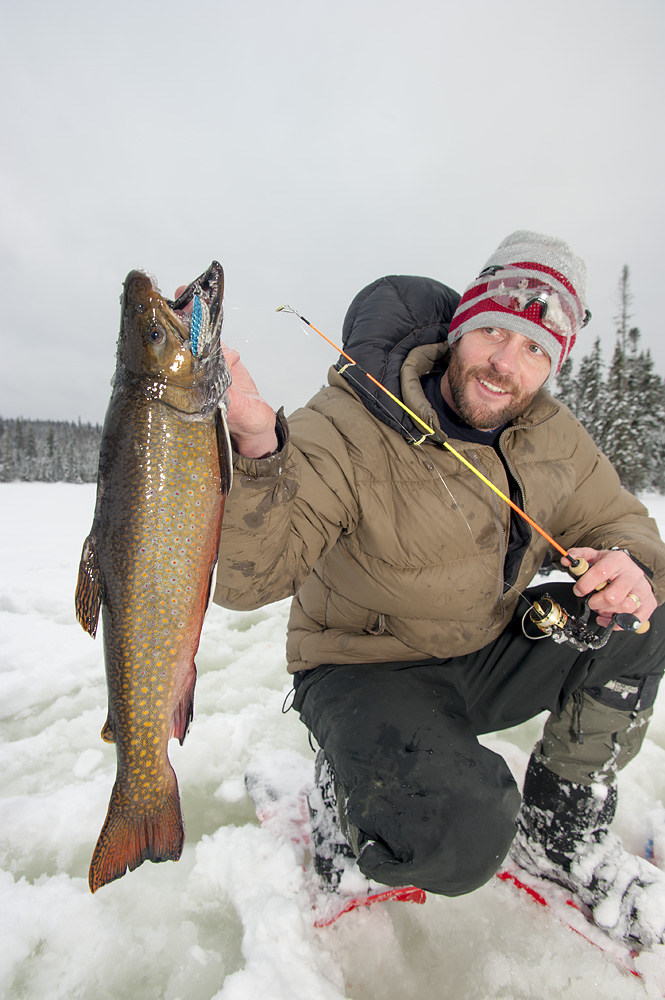 If it wasn’t for brook trout I might never have learned to build a quinzee. It was the lure of the square tail that put me in the bush before the sun, and saw me trudging home well after dark. Sometimes with fish, sometimes not, but always with an urge to reach the lake beyond.

Waters that boil with wild brook trout are usually a long way from any roads or snowmobile trails. They sit quietly in the frozen forest, guarded by steep hills, deep snow and pure distance. So when the proverbial “next lake” was just too far to reach in a day trip, I had little choice but to plan an ‘overnighter’. The quest for wild brook trout meant I would spend the night in a house of snow: a quinzee.

I introduced the idea to my fishing partner. He too was haunted by big brookies swimming in lakes beyond the realm of a day trip. We knew the theory: we’d need a pile of snow large enough, when hollowed out, to accommodate two horizontal men. As we snowshoed through hardwood stands and cedar bogs, we wondered aloud about the wisdom of our plan. At one point my partner asked if trying to stay warm in a shelter of snow wasn’t like trying to dry off with a wet towel.

But we were committed. After a full four hours we finally reached the unnamed lake cradled between two rounded old mountains. After a half hour’s shovelling our evening’s accommodations stood before us in the form of a 1.5 metre high mound of snow.

We built a fire and made soup while waiting for the pile to bind and harden. There was some discussion of alternate shelters just in case of a cave-in. An hour passed before we started to hollow out the mound with a narrow plastic shovel. The soft, fluffy snow was now compressed and firm. We took turns burrowing out our night’s lodging.

I poked a 10 cm diameter hole in the roof for ventilation while Paul spread a nylon tarp, ‘Thermorest’ mattresses and sleeping bags inside.

With the structure complete the prospect of sleeping in a cocoon of snow was becoming more and more attractive—especially when faced with a four hour snowshoe home. We set four lines in a shallow bay and watched from beside the fire. After the day’s exertion, relaxation was high on the agenda and we were almost glad the trout were not biting.

A brisk wind continued into the evening but inside the quinzee it was quiet and still. A single candle cast a surprising amount of light against the white walls. After blocking the entrance with our packs I blew out the candle and drifted off to sleep immediately. The next time I opened my eyes sunlight was permeating the walls. Not only were we alive and frost-free, we were well rested and comfortable. And more important, we were right where we wanted to be: on a lonely northeastern Ontario brook trout lake in the stillness of early morning.

The tranquillity was broken when we jigged small spoons at a dropoff in front of a beaver house. We kept a few 16 inch specks, bid our quinzee farewell and made it home well before dark.

That initial trip affirmed the superiority of a quinzee for winter camping. In a tent, a thin layer of nylon is the only buffer between you and the outside. But with insulating walls of snow, a single candle will keep the temperature just below zero in the coldest conditions. A quinzee also lets you travel light. It doesn’t sound like much, but when snowshoeing, a six pound tent can weigh you down over the long haul.

In deepest darkest winter, daylight hours are scarce. Day trips see us walk in during the morning feed and walk out while the brookies take their dinner. But build a quinzee and you can fish the peak hours. A bit of shovelling is all it takes to wake in the heart of brook trout country—right at feeding time. 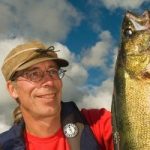 Professional photographer and writer James Smedley’s contributions - more than 400 written pieces and close to 1,000 images - to U.S. and Canadian books, magazines and newspapers have earned him over 40 National and International awards. In addition to teaching photography workshops, James is Travel Editor at Ontario OUT OF DOORS Magazine. James has fly fished for brook trout and arctic grayling in far northern rivers and continues to cast for trout, bass and steelhead near his home in the northern Ontario town of Wawa where he lives with his wife Francine and daughters Islay and Lillian.
Subscribe