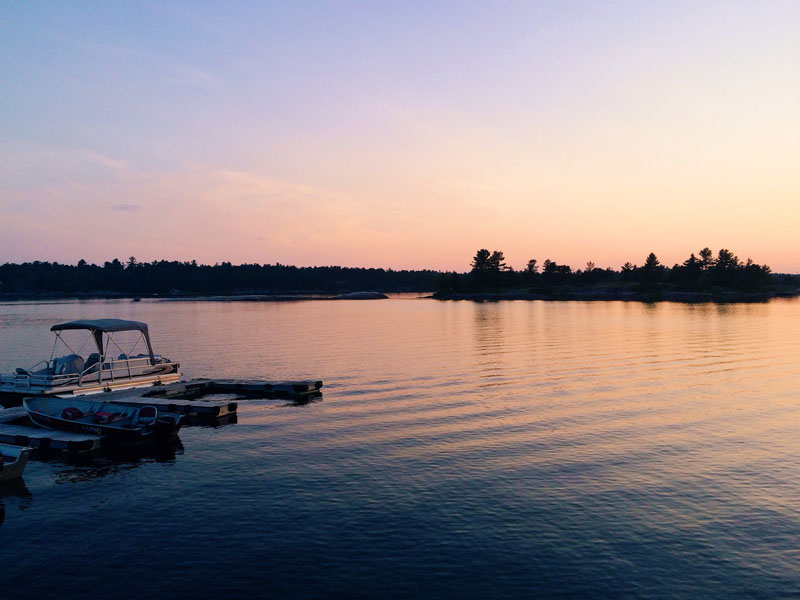 To say that I enjoyed fishing as a young girl may be a bit of an understatement. It started when my dad took me to nearby lakes and rivers with a fishing pole that was taller than me, where I really developed a love of being outdoors and exploring the different regions of Ontario. Growing up in Southern Ontario, it was always my favourite time of year when we would head up North for a week of paddling, swimming, campfire cooking, wildlife searching, forest hiking and, of course, fishing. So when my good friend Karin first asked me to come spend the weekend at her family’s favourite lodge on the French River, I immediately jumped at the opportunity.

The lodge was located right on the edge of a large rocky bay in the heart of the French River. Neighbouring cabins lined the shore and a large dock stuck out into the water—all of them facing a typical French River view of towering pine trees reflecting off of the River below. It was perfect.

Click here to check out French River Lodge for a great fishing getaway on the French River!

On our first morning at the lodge, we readied ourselves for a day of fishing and boarded a Pontoon Boat from the dock. Looking around the boat, I noticed an anchor, minnow bucket, landing net, several coolers, and life-jackets. We spent some time navigating the winding river, around countless islands and numerous channels, between steep-walled gorges and wide open expanses. The rugged glaciated river floor rose and fell beneath us, sometimes dropping off to more than 30 feet.

We stopped the boat a couple of times to test the water for bites. No one was lucky for the first couple of tries, but by the third stop, we finally had some action. Feeling the excitement of the moment, we all cast our lines in, waiting for and expecting bites. Nothing happened.

An hour went by—still no one had caught any fish. Our guide decided that it was time to find a new spot, and we zipped around a few more corners and into a new place. Everyone cast out their lines once again, and we waited. Suddenly—one line bobbed. Someone on the other side of the boat started to reel in a fish. And then, two more lines bobbed.

We had three fish at one time—the boat erupted into chaos.

Only our guide was able to retrieve the catches with his large fish net so he ran frantically from side to side, scooping up the fish and bringing them into the boat. Just as we got two fish in, another line bobbed and we had caught a fourth one! It seemed as though we had hit some sort of aquatic jackpot.

Before I even had a chance to examine my own fish, I was feeling another tug on my line. I had another fish! We spent another hour or so bringing in fish after fish.

Soon it was time for a shore lunch.

We floated up at a shallow rock face where everyone could hop out and scramble up the low slope. Our guide anchored the side of the boat to a small boulder and unloaded the cooler that I had noticed earlier along with our fresh catches from the day.

At the top of a rocky hill was a fire pit and cooking grill, surrounded by a few rocks for seats. I proceeded into the woods to collect firewood, while the others began preparing the fish. Our culinary spread consisted of potatoes with onions, bacon, beans, the fish that we caught, and even cookies for dessert.

Our guide started with the bacon, frying it up and resting it on a plate. He dumped the potatoes into the same pan, re-using the bacon grease and adding an extra flavour to the potatoes. Next, he fried up the fish which he had already de-scaled, gutted and filleted, while teaching us to fry them skin-side down. As he fried the fish, he added onions into the potatoes and popped three cans of beans on the edge of the fire. We opened some beers and patiently waited for the food to cook. The plates were prepared, and all of the food came off the fire at the same time. Everyone loaded up on the meal in front of us, and quickly dug in.

Plates and cutlery were placed on the ground, one by one, and everyone finished their lunch. There was a period of silence, where everyone looked around and started to digest their food.

It was a peaceful feeling—to simply sit quietly surrounded by nature.

There’s just something about being alone—even if you’re with a few other people—in the wilderness. Nothing but trees and water surround you and, instead of traffic and construction, you hear birds and rustling leaves. It’s incredibly relaxing, and the French River is one of the best places to experience it.

Fishing is not the only way to enjoy the French River. There’s an even more adventurous way to really get up close and personal with the River, and that’s kayaking.

I’ve been lucky enough to have kayaked all over North America, from Vancouver Island and Kelowna, BC, to the Florida Keys and Lake Superior. But, what set the French River apart was the incredible raw landscape and quiet remote atmosphere.

I paddled along with Karin and her partner for some time as we chatted and weaved in and out of formation. We glided along bare rocky shores, through shallow grassy coves, and eventually made our way out into the open water. At times we spread apart, exploring the different bays on our own, and occasionally met up to plan a new route.

Eventually we began to make our way back to the lodge, where we pulled the kayaks ashore, and secured them for the night. As the sun began to set, we all walked out onto the dock to take in the beautiful view, and I quietly fell in love with the French River. 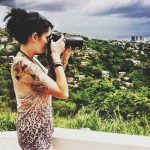 Seattle Dredge is a 28 year old travel blogger, currently living in Southampton, Canada. Seattle often travels solo, in search of adventure and the perfect photo opportunity. This blog is a place to share those adventures and inspire others to do the same. And yes, her real name is Seattle.
Subscribe