Get The Most From Your First Ride of the Season 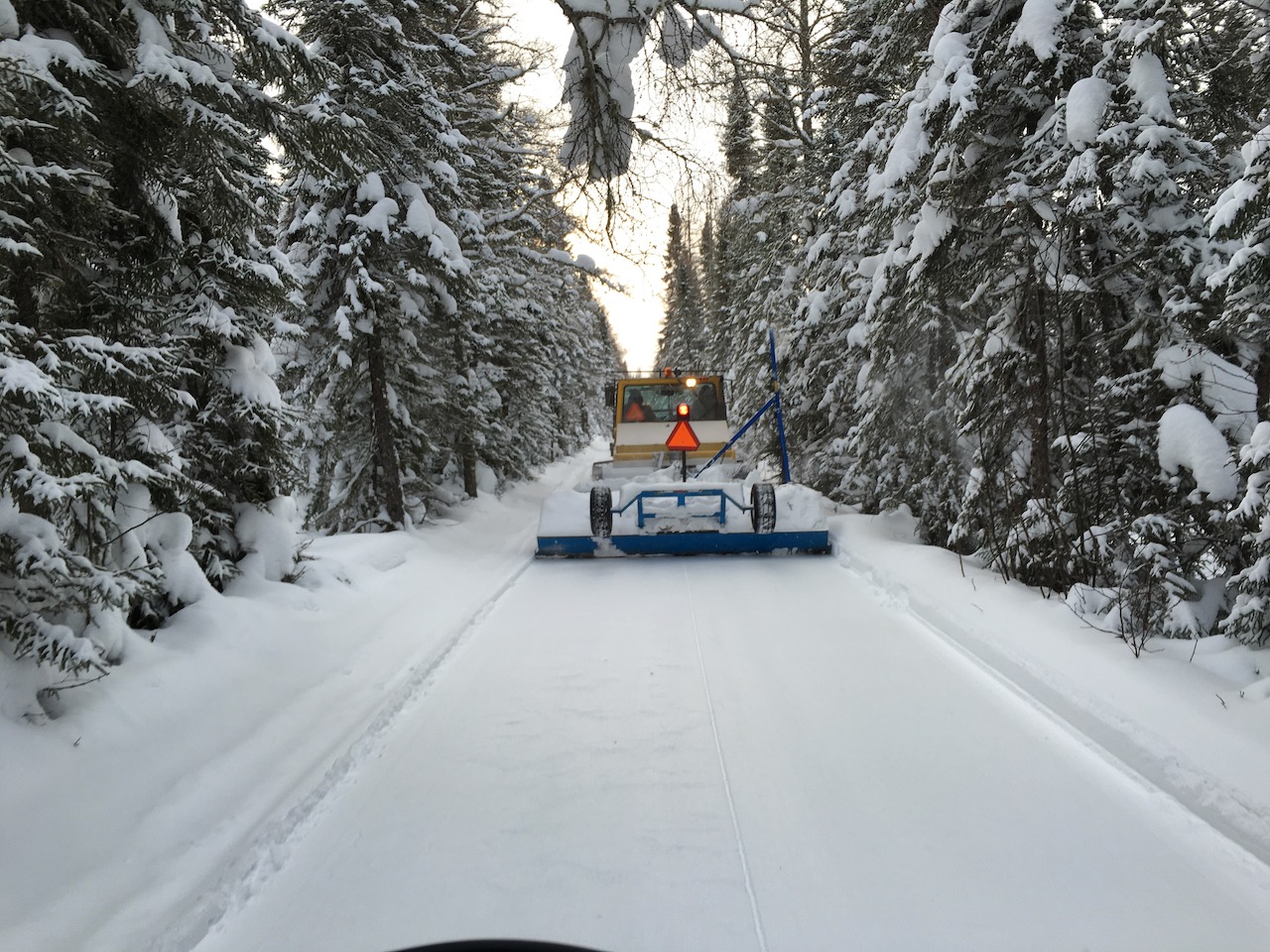 The first nip of cold reignites that unquenchable passion in the souls of snowmobilers. The excitement of anticipation intensifies with every flake swirling in the air, building to an intense craving quenched only by putting tracks to trails. So, many trail riders embark on a pre-season quest to find the best location for that first ride of the winter over the Christmas holidays or in early January. When it comes to early season choices, Northeastern Ontario is normally a prime contender if Old Man Winter cooperates. 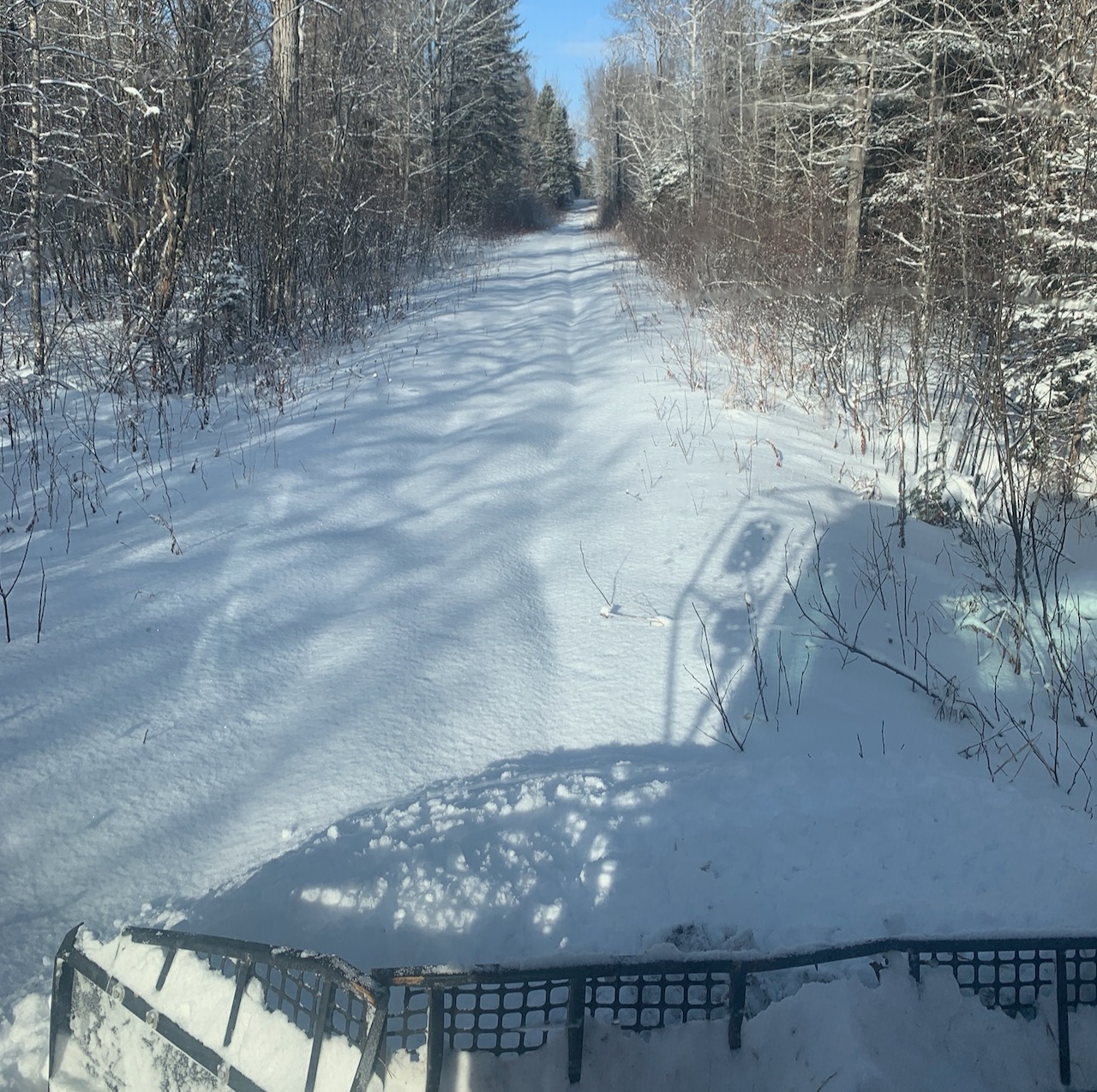 Northern Ontario Has What It Takes

That’s because Northeastern Ontario is endowed with more of what it takes to make trails ready to ride early. Stretching from Lake Nipissing to James Bay, the region includes OFSC Districts 11, 12, 14 & 15 and benefits from prolonged sub-zero temperatures from December to April. The plunging mercury starts freezing the ground in the late fall. It also drives a long-lasting frost deep into the earth, providing a cold sub-base that retains early snowfall into the spring. And although a very high percentage of their trails
are land-based, that cold is also needed to start freezing up swamps, creeks, bogs and rivers that must be crossed for trail connectivity. 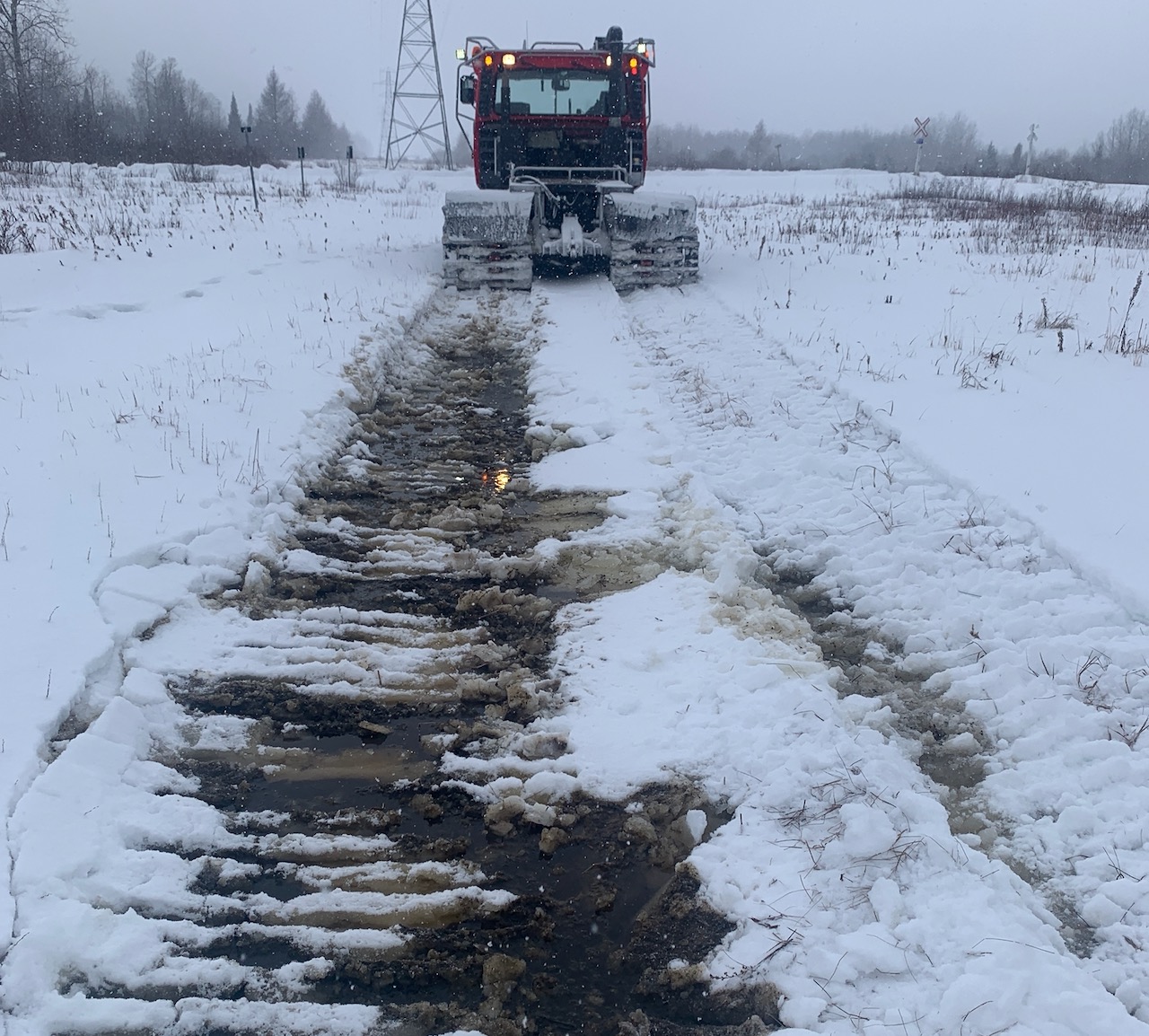 Northeastern Ontario’s cold also primes the atmosphere for early snow. About 25-cm accumulation is needed to protect the trail surface so groomers without drags can start to hard-pack a durable foundation that freezes solid to last all season long. Every subsequent snowfall deepens that new trail base and provides a fresh covering so groomers with drags can start smoothing the trails.

As savvy snowmobilers know, the farther north you go early in the season, the colder it gets, so OFSC Prescribed Snowmobile Trails across the Northern Corridor, between Cochrane and Kapuskasing are typically the first ones ready to ride in Northeastern Ontario. Because many of these trails are on utility corridors, cut lines and forest access roads, they don’t require as much snow to get ready as those in more rugged terrain. 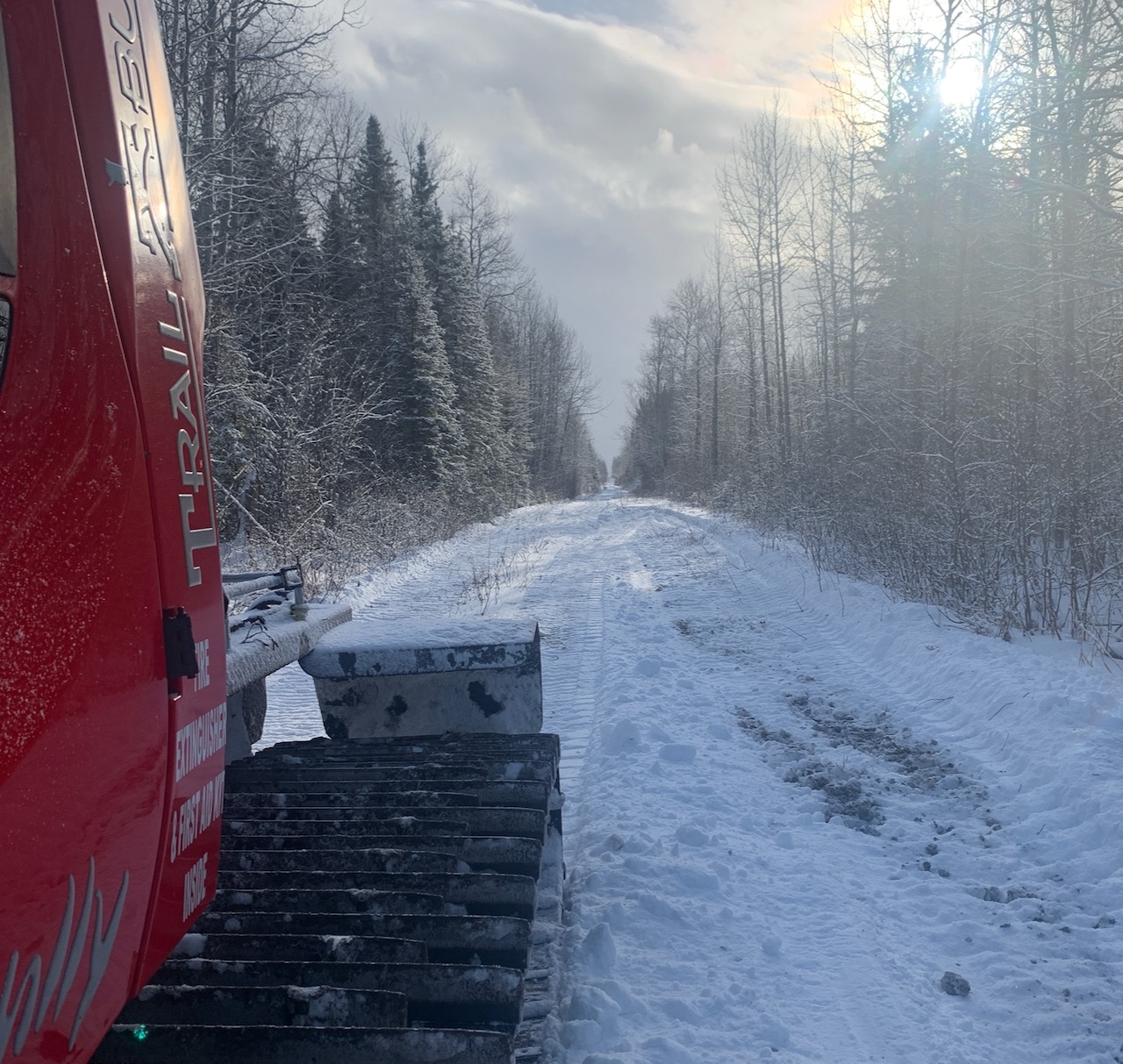 In fact, snowmobile clubs in that area started packing early snow on their trails the first week of December this year, and their water pumps are ready to thicken ice on the river crossings. These repeated, man-assisted cycles of flooding and freezing help form ice bridges that allow groomers (and sleds) to pass over earlier than in more southern areas and throughout their extra-long season. 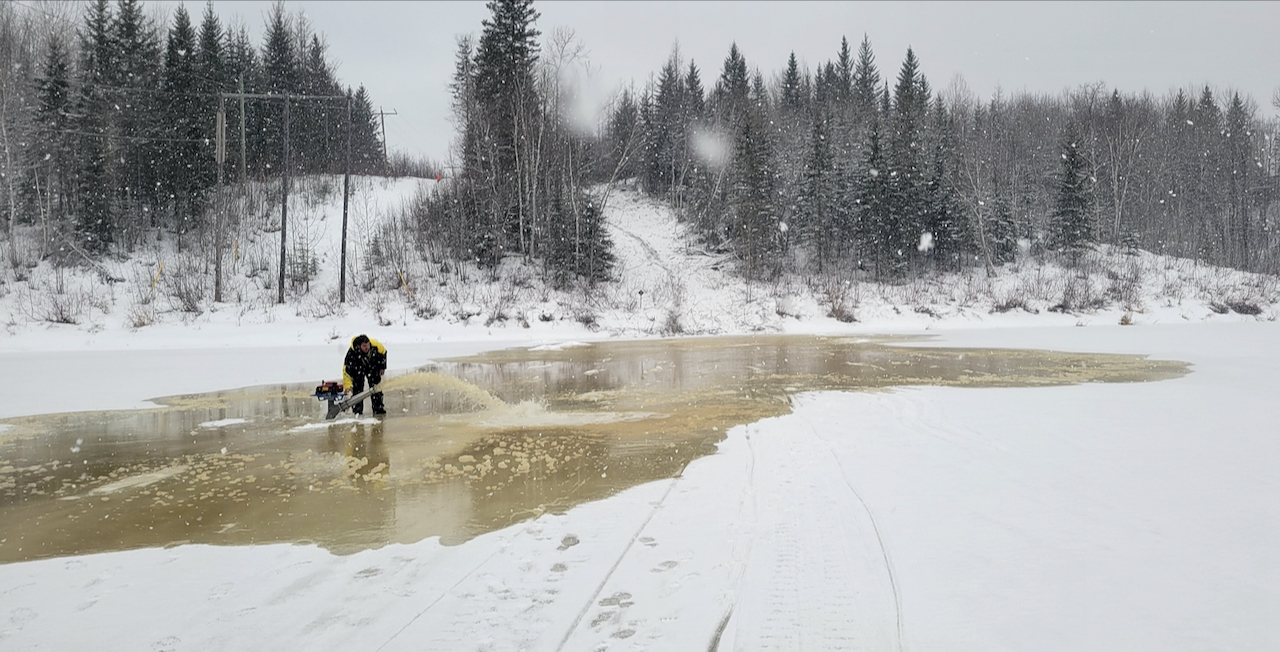 Certainly, the process of getting trails ready to ride isn’t unique to Northeastern Ontario. The District 15 area of Northeastern Ontario just gets there sooner and faster thanks to consistent early cold and snow. Nonetheless, your first trail ride of the season won’t be the same as what all of Northeastern Ontario can offer for the rest of the winter. In season, you can ride OFSC trails north from North Bay or Sudbury, taking in any or all of the region’s many remarkable snow tour loops and snowmobile-friendly communities to your heart’s content. 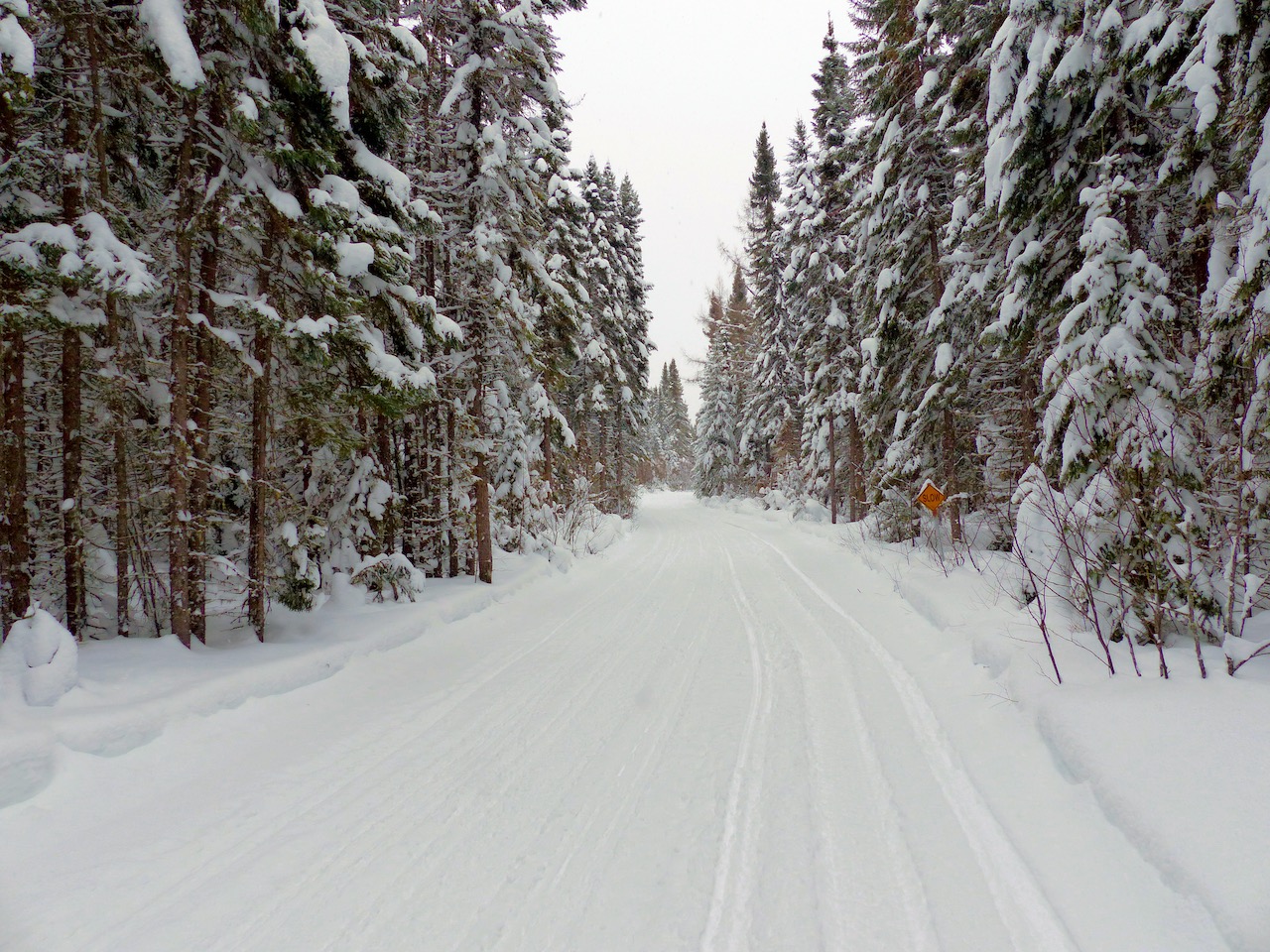 Pre-season trail riding is usually much more localized than mid-winter sledding. It involves only those special sweets spots farthest north where Old Man Winter has cooperated to the max. So, always Ride The North early with the understanding that even in these sweet spots, conditions can be variable before the whole system gets open and connected. So their full gamut of trails may not be ready or have reached mid-season quality for your first ride. Or if you ride too far out of one sweet spot area, the snow may get a little skinny. Be sure to check the OFSC Interactive Trail Guide (ITG) before and during your ride for trail status and availability. Then plan your first ride of the season accordingly, only on trails showing Yellow or Green, never on Red. 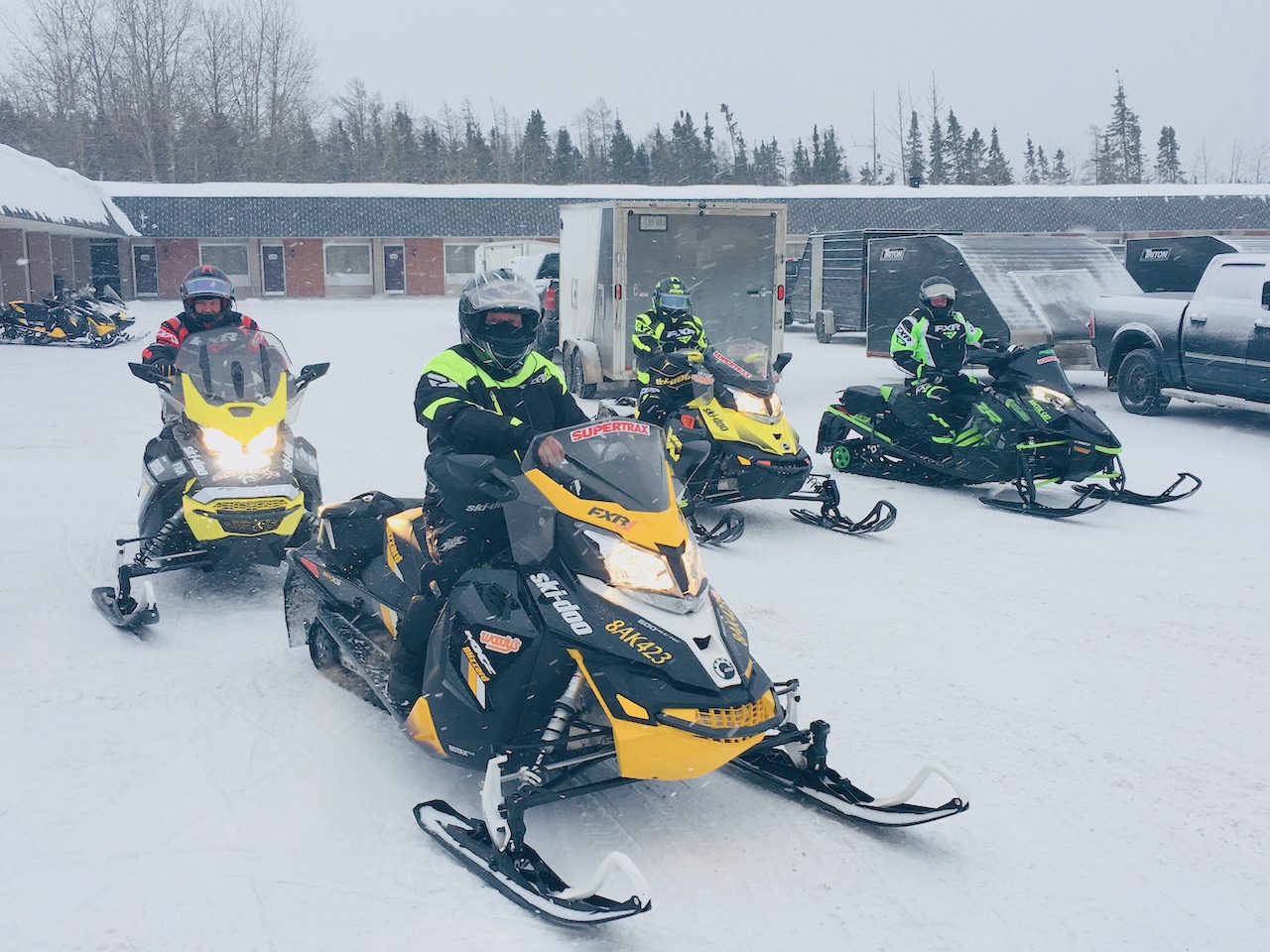 What Kind of Riding Can You Expect?

For the early season in Northeastern Ontario, our group has had success with what I call “pocket riding”. That means staying in one place, and trail riding from wherever trails show as available to ride. But on other days, we trailer a short distance to a nearby, but as yet unconnected, snowy area where local trails are also ready to ride, then return to our staging accommodations for the night. Sure, you can’t do full-blown saddlebag touring in pre-season. But your goals may be different anyway. They may lean more to breaking-in your new sled, checking out your gear, re-acclimatizing yourself to winter. And of course, grabbing the bragging rights to being first on the trails. Northeastern Ontario also has no short of snowmobile rental and repair locations if you come across any issues throughout your travels. 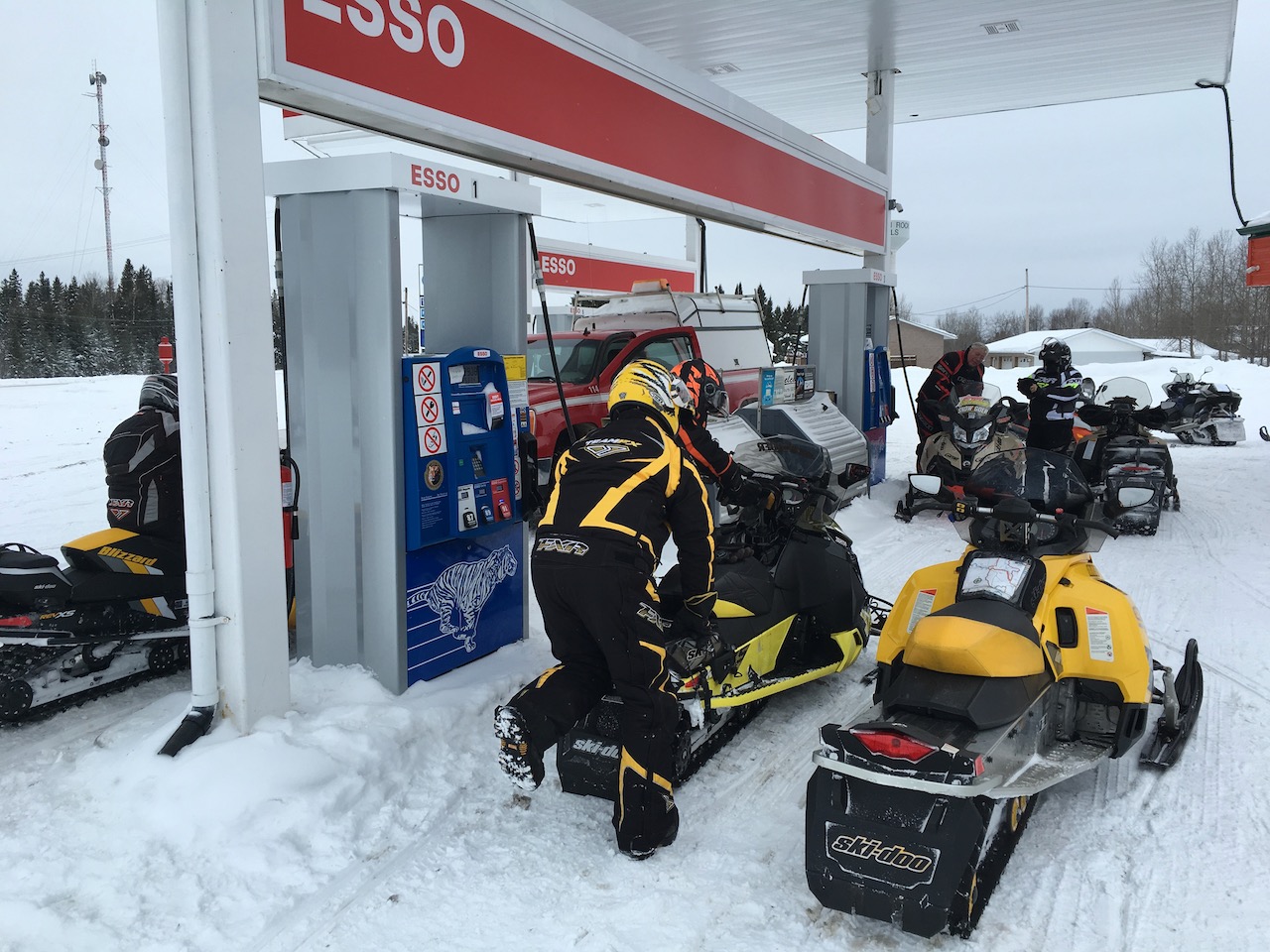 Ride The North Rite Of Passage

Without a doubt, trailering to Ride The North of Northeastern Ontario has become a rite of passage for kicking off a new winter. And it must be worth undertaking that early season pilgrimage, because many avid snowmobilers do it religiously every year. So, you might as well go where the pre-season snow and cold are most dependable, where lodging, restaurants, gas stations and snowmobile dealers are always open to serve you – and where you’ll discover some of the widest, most inviting trails Ontario has to
offer. That’s in Northeastern Ontario, where snowmobiling exhilaration is a given, pre-season and all winter long! 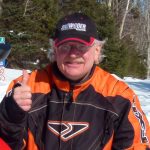 Popularly known as “The Intrepid Snowmobiler” Craig Nicholson is an International Snowmobile Hall of Fame powersports journalist, who specializes in writing about snowmobiling. As an avid snowmobiler, he logs over 12,000 kilometres (7,500 miles) on the snow most winters and has snowmobiled in every region of Canada. His one-of-a-kind tour book, “Canada’s Best Snowmobiling – The Ultimate Ride Guide”, chronicles his adventures. His Intrepid Snowmobiler blog features Canadian touring articles, sledding tips, reviews and comment. You can also follow him on Facebook and Twitter.
Subscribe