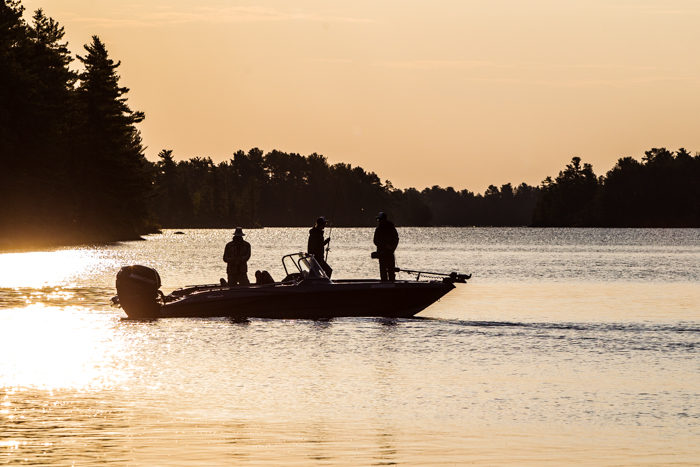 I particularly like fishing with my two sons. But if I were to describe my fishing knowledge it would be something like: just scratching the surface. We’ve had some good days but, for the most part, it’s been more about the experience than success. I want more—I want the type of fishing day with my sons that will make dinner table conversation for at least a generation. That kind of success, I believe, depends on three factors: location, knowledge and gear. I have a location in mind—Saenchiur Flechey Resort—a beautiful spot on the West Arm of Lake Nipissing where apparently we can pluck walleye right from the dock, and as luck would have it, they know a guide, Danny Colomby, from Nipissing Muskie guiding service. Location, knowledge, and gear! We’re all set! The only thing left to chance is the weather and the fish’s interest in participating in our plans.

Up to now, our fishing has been from a kayak or a small aluminum boat, so watching Danny launch his sparkling Triton fishing boat, our pounding hearts spoke louder than words. A quick round of introductions and it’s clear why Daniel and Rick here at Saenchiur Flechey Resort speak so highly of Danny. His ‘we’ve been friends forever vibe’ instantly takes us all from first meeting to fishing buddies. Everything we need is already in the boat, rods, lures, even lunch. We hop in, a few minutes of instruction and we are good to go.

Pike is our intended target and at this time of year, mid spring, the best place to find them is in the shallow reeds at the back of bays. Danny drops down the electric motor and starts handing out rods. Preston, thirteen years old, who is the most eager angler in our family, grabs the rod and quickly launches a lure for the shallows. Spencer, 15, likes fishing but more in a take-it-or-leave-it kind of way.

I have been avoiding introducing Spencer to the bait caster feeling that the learning curve will do more damage to his confidence than good. So I am a bit concerned.

I turn my head just in time to see the water boil and a long shadow disappear into the reeds, miss. Preston’s eyes swell with determination. Meanwhile in the front of the boat Spencer is flinging the bait caster like a pro, wow! We make another pass, Preston sends his lure back into the shallows. Two rotations on the reel and BAM fish on. Not a monster but it’s a start.

It’s nice to have the first fish in the boat but it’s not all smiles and high fives. That variable that you can’t control known as the weather is working against us. It’s cold, there was snow falling in the area a couple of days ago and this morning a thick layer of frost. Typically with a cold front the fish turn off and unfortunately we are proving that theory correct.

We move on to the next bay, four rods throwing lures in all directions and nothing, the wind is picking up and rain clouds roll in.

Spencer, the bait caster newbie, is hooked in to something and judging by the thrill and fearful expression on his face it’s a good one. It takes all his strength to keep the rod tip up and crank the reel. It’s a muskie, a nice one but not what we want to see. Muskie season is still a month away so a fast and gentle release is in order. No problem, we are chasing BIG memories and I’m sure he will not forget this one any time soon. We hop from bay to bay, a few small pikes a few walleye but the big monster pike that Lake Nipissing is famous for still eludes us.

“One more bay and we head back,” we all nod in agreement. With fading light and the constant wind, we toss lures in all directions with a cold induced numbness accepting that the big one is not meant to be today.

“Fish on,” it’s my turn. I was ready to put down the rod after this retrieve but now I’m looking down the bent shaft of my rod as the captive at the end of the line leaps into the air.

“It’s a muskie” Danny instantly identifies. Dang another muskie, I can’t believe I’m disappointed. Kinda funny, a month from now I would be ecstatic. One more bout of aerial acrobatics on the way to the boat and Danny is able to reach down and pop the hook.

Back at Saenchiur Flechey Resort. It’s nearly 9 pm by the time we hit the couch in our rental cottage. Today was in the words of our guide “tough fishing”. Cold, wind, rain, we were bouncing across white caps on the open lake but it’s smiles all-around, we would all do it again in a heart beat.

A typical guided fishing day is morning till dusk but with this being the early season and with the unpredictable weather conditions we arranged to go noon to noon. Back at the boat by 6am, no frost, good sign; the sun is rising, good sign; we land a nice pike right by the dock, good sign; water temperature 55°, not so good, the fish like it around 60. We jig for some walleye that we can clearly see on the fish finder, and we can also see the worm wiggling its tail right in front of the fishes nose, no luck. We land a couple more small pike, but over all it’s a struggle.

“One more bay then we head back,” are familiar words.

It’s almost 11am, the sky, clear and blue; the sun high and bright, finally it’s warm enough to strip off our coats. First pass no action but you can feel the sun’s energy caressing the lake to life. Second pass, we toss the weedless spoons practically onto the shore looking for the warmest water.

“Fish on!” The rod bends as I pull up to set the hook, the water boils with the flip of a tail then the line goes slack. Dang! A miss! A couple more casts and I repeat the same scenario. It’s as if someone hit the on switch; we can see pike chasing our lures from the shadows, we can see pike following our lures right to the boat. The energy is infectious. In 45 minutes we count 20 strikes and manage to land four pikes and one bass.

The go-to lures: Most of the fish were caught on Johnson Silver Minnow weedless spoons in either gold or red/white with a white grub trailer. We also had success with Rapala Husky Jerks in silver with blue back and orange belly, Bomber Long A lures in reflective silver (mirror) with black back and orange belly, and spinnerbaits. Get the 1/2 oz to 3/4 oz with silver and/or gold willow leaf blades.

It’s time to go but nobody is willing to make the call. Each cast is the last one and the last cast is repeated over and over again but eventually all good things must come to an end. Seems like the BIG Lake Nipissing pike just wasn’t meant to be, but the fishing frenzy we experienced in the final hour definitely left us hooked on the thrill of the chase.

Overall the fishing was challenging but we all still managed to land the biggest fish of our lives, thanks to our guide’s never ending efforts. Leaping Muskies, a dozen pike, a few walleye, blistering cold winds and spraying white caps, I think we will be talking about this trip around the dinner table for some time. Well at least for a month, Muskie season opens third Saturday in June. After that, we’ll be looking forward to making more memories on our next father/son fishing trip on Lake Nipissing. 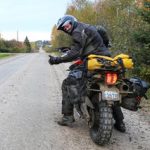 Martin Lortz is a freelance photographer/writer specializing in the outdoor lifestyle. Whether he is covering adventure motorcycling, kayak fishing or family oriented outdoor pursuits, his passion for capturing the beauty of nature and the people that partake in it, is evident in his work. His photos and articles have appeared in magazines such as Ski Canada, Explore, Bike, Mountain Life, Couloir, Kayak Angler and Family Camping, as well as in calendars, catalogs and brochures.
Subscribe