A Reckless Kind of Joy on the Great Legends Tour 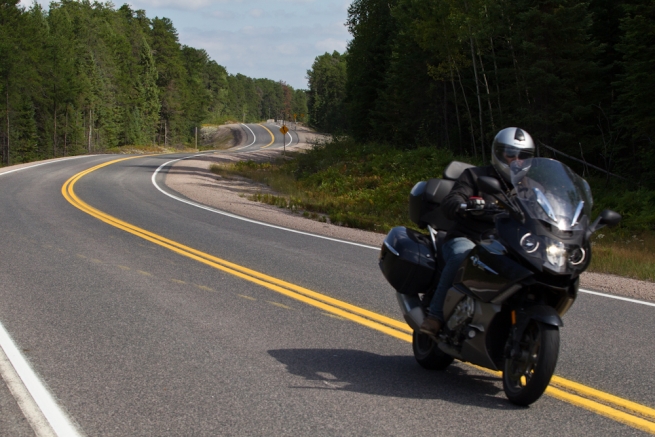 New pavement and old secrets make the Great Legends Tour one of the best!

Editor’s Note: For his big summer ride on a big BMW K1600GTL, Mike Jacobs ventured from Sudbury through Timmins up to Kapuskasing and then back to Sudbury via Temiskaming Shores and North Bay. Officially called The Great Legends Tour, this route has been a favourite of technical and adventurous riders for decades. Mike’s been riding parts of it for years, but discovered something new this time around.

Sometimes in life, you forget how wonderful the things you have really are.

Case in point: The Great Legends Tour. (And Northeastern Ontario as a whole, I might add.)

I’ve been riding in this area for the past five years. My cottage is just south of Temiskaming Shores.

In fact, I vividly recall how utterly in awe I was of the tall windswept pines the first time I passed through Temagami on Highway 11. I fumbled with my iPhone just to try and capture one or two of these magnificently tall specimens, with a few blurry shots as my reward.

All too often these days we’re in a rush to get where we’re going and find ourselves using these incredible roads as just a means to get from point A to point B.

And then we stop. We take it all in. And we’re so grateful that we did.

I had the chance to ride them all again but this time I had no agenda—I could go as fast or slow as I wanted, stop and take pictures, and, well, rediscover the familiar.

From Sudbury to Timmins

The Great Legends Tour is 1350km (roughly 800 miles) of unadulterated Northern riding. What sets Northeastern Ontario apart from other destinations in North America is the solitude you’ll experience here and the regenerative effects of that solitude.

This isn’t some mad dash to the Tail of the Dragon to squeeze in a day or two of riding before heading home—this is a route that is meant to be savoured.

On this particular journey I started in the city of Sudbury; a great place for a last hurrah of urban delights before heading into the cleansing wilderness.

I had an amazing porchetta sandwich at Barolos for lunch, toured the city and took in a couple of attractions including some of the street art that’s taking over the city this summer. I grabbed some photo ops at the Big Nickel at Dynamic Earth, and Bridge of Nations, all before heading to dinner at The Towne House, the place where Stompin’ Tom Connors got his start.

The next morning I left my very motorcycle-friendly accommodations at Travelway Inn (central to pretty much everything in town) and headed north on Highway 144. And what a great way to start this legendary road trip.

Recently, major sections of 144 have been repaved—as have many highways in the Northeast—and the result for a motorcyclist is a reckless kind of joy. What I love about this highway is the high perch the road has over seemingly limitless lakes rivers and streams. Now that the road was properly paved, I felt like a bird swooping through rockcuts all the way to Timmins.

About midway from Sudbury to Timmins is the Watershed Restaurant and Gas Station. The food is good and it’s the only gas along the way, so I filled both tanks here.

It drizzled on me all day, but this did nothing to dampen my enthusiasm for the ride. Besides the sure footedness of my BMW, the lure of my destination kept me on the road. I can tell you that  Cedar Meadows Resorts’ Spa was put to good use that evening, where the hot baths and sauna took the chill out of my bones.

From Timmins up to Kapuskasing and on to Elk Lake

The next morning I headed north again on Highway 655 and made a few important stops along the way: Moe’s Chip Stand in Smooth Rock, the Moonbeam UFO, and finally The Super 8 in the town of Kapuskasing. I’ve done a fair bit of traveling in this great world and I know a great hotel when I stay in one. Let me tell you—The Super 8 in the Kap doesn’t disappoint.

Neither does La Boulangerie in town: I had my fill of their delicious pastries the next morning before exploring town. Kapuskasing has a roundabout in the centre of town and all the main business and traffic flows around the quaint park at the heart of it.

I got a strong sense here of the French-Canadian culture that pervades this area of Northern Ontario and of all of the little ways in which this storied people infuse the land with their way of life.

I filled up on pastries and I continued south on Highway 11, always travelling at my own pace. Traffic was light and the road was in good condition so I was able to hit the cruise control and crank the tunes. The sky was clear and blue and I stopped at the statue of the legendary Guy-Paul Treefall just outside Iroquois Falls for a photo op.

That day stayed clear for me from start to finish, so I took the long way into Elk Lake, my final destination of the day. From Highway 11, I rode east to Kirkland Lake, south on 112 took me back to Highway 11, then north on 11 to Highway 66 West.

I feel the need to pause when talking about 66 West. I went back and forth on this highway four times before continuing on my way. This is likely the most densely packed set of twisties in the province. True, it doesn’t go on for hundreds of kilometers, but the 20 km stretch of the really tight stuff rivals anything I’ve ever ridden. The rest of the road has enough long gentle sweepers to keep most riders entertained. (it’s the photo you see at the top of this article)

I reached the Elk Lake Eco Centre just after 6pm and after dumping my gear in one of the nicely appointed cabins, I headed into the main building for a locavore dinner. I’ve been to the Eco Centre many times, and have never been disappointed with the killer cuisine here. Although they’ve got a new General Manager, he seems to have quickly identified one of their core strengths: the kitchen staff!

From Elk Lake to Temiskaming Shores and Heading Home

The next morning I woke in the too-comfortable beds and slowly eased myself and my gear back onto the mighty BMW and headed east on Highway 65 to Temiskaming Shores.

Although this road is mostly straight and flat (with a couple of killer sweepers that seem to go on forever) it’s the contrast to the rest of this region that makes it POP for me: massive fields of blinding yellow canola, old farmsteads, and big rolls of hay framed by some low mountains make it a great ride.

In Temiskaming Shores I stop for another photo op at the Miss Claybelt statue, before taking highway 11B along the shores of Lake Temiskaming and through Haileybury, one of the nicest little towns in the north.

I zipped under the Latchford bridge and was not long on Highway 11 south before I passed Temagami and the turnoff for another of the Top 10 roads in Northeastern Ontario: Highway 64. This time my reward is the endless swinging back and forth through this quiet cottagey road AND the extremely difficult choice when arriving in Sturgeon Falls of whether to get poutine at Larry’s or The Riv.

I have extensively tested both places, and spoken with both owners and there are very strong merits to both. The Riv boasts a homemade batter for their pogos, and both talk about their special recipes for their “sauce” (French for gravy, lol). I have my preference but I truly believe a trip to Northeastern Ontario isn’t complete without sampling from both places, and I’m not just being diplomatic.

The day’s epicurean delights don’t end there. I stop off at Saenchiur Flechey Resort to take a quick shower and head back north on Highway 64 to the Lavigne Tavern which claims to have the best pizza north of Toronto.

I know my pizza, as I know my poutine, and I can honestly say this pizza is a serious contender. What they don’t boast about is the hospitality, the generally amazing ambience (there’s an old BSA sitting beside the stage), and the killer view of Lake Nipissing as you ride into town.

For my final night of this tour I took the liberty of taking a late afternoon swim when I got back to the epic Saenchiur Flechey resort. I can tell you that there is a world of difference between swimming in a big, quiet northern lake and jostling for space at an overcrowded beach in the south.

On my way home the next day I stopped in for a quick lunch at the French River Trading Post. I saw dozens of families stopped for lunch too, but they were making their way north, while I was heading south.

I could only hope that they would also take the time to experience a bit of the places they passed through along the way. If you’re rushing to get to your destination, have you really escaped the city at all?

See you on the roads in Northeastern Ontario, my friends.

Mike is an avid motorsports enthusiast - you'll find him at home on ATVs, snowmobiles, motorcycles and powerboats. Check out his Twitter feed for some great ideas on adventure travel!
Subscribe